Step is a physics simulator for KDE 4. It’s meant to be an educational tool, but I’ve found it to be fun just to play around with also. Step was written as a Google Summer of Code project for KDE by Vladimir Kuznetsov.

Install Step from the package step-kde4 (click the link to install), or by running the command below in your terminal: 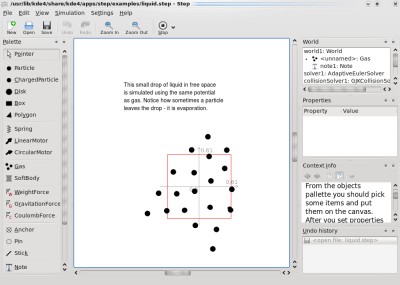 I’d recommend checking out the examples to get an idea of what Step can do. Load an example from File->Examples->Open Example. Then, click the Simulate button on the top toolbar to run the simulation. When you’re finished, click the Stop button.

Now try creating your own simulation. One interesting thing to try is attaching a tracer to another item such as a box or disk and watching the paths you can create by applying different forces. Below, I’ve created a box object and given it some velocity. Then, I attached a linear motor to the box pushing a different direction. I attached four tracers to the box. This is the result I got from the tracers as the box started spinning: 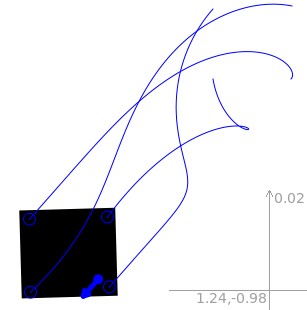 If you’re like me, and enjoy applications like Step, then you should also check out Phun, which is a similar, but less education oriented, physics sandbox.

Cool!
Is there any thing like this for Ubuntu Tom?
I have Encarta and it doesn’t have this. Though Encarta maths rocks!
I have an important question for you. Which software do you use for blogging? I love Windows Live Writer to blog. Is there any decent alternative for this in Ubuntu? Atleast one with WYISIWIG and image upload feature? Can I run WLW using WUBI? Some one has posted a hack to run Office 2007 on Ubuntu!
I desperately want an blogging client because I have my own Linux blog at http://helpforlinux.blogspot.com/

Have you installed Kiba-Dock? it’s like the Akamaru physics engine, just replace those dots with launcher icons. Linux developers should pay more attention to this, i think. What I see in kibadock’s akamaru is something new that I never see it in other OSes, a peek into the future, in fact.