KDE 4.1, the second major release of KDE 4, has been released. KDE 4.1 adds new applications (including the KDE PIM suite), improvements to the Plasma desktop shell, and improved frameworks for developers.

The same day as KDE 4.1 was released, packages were available for Ubuntu. You can easily install a KDE 4 desktop alongside your normal Ubuntu desktop and switch between both.

Close Software Sources, and when prompted, choose to reload the repositories.

After the installation is complete, you’re ready to start KDE. To switch between GNOME and KDE from the login screen, click Options and Select Session.

Aren’t ready to switch completely to KDE applications? You may notice that your familiar GTK apps look really bad running in KDE 4. The package gtk-qt-engine-kde4 adds options for theming these application to fit in with KDE.

You’ll need to log out of KDE for the new options to appear. Once you’re logged back in, open System Settings and select Appearance and then GTK Styles and Fonts. Select the Use my KDE style in GTK applications option. Click Apply, and log out to make the changes take effect.

The GTK theming isn’t perfect, but it has been working well enough for me. Just look at Firefox before (bottom) and after (top): 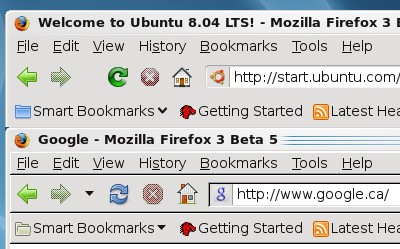 I’ve been very impressed with KDE 4.1 so far. The desktop looks beautiful and makes a great first impression. Many complaints from KDE 4.0 have been fixed; it’s now easy to distinguish the active window, and the panel is a reasonable size. Plasma is reasonably configurable, it’s easy to create, move, resize, and rearrange panels.

The Install New Widgets feature for Plasma is really cool. It allows you to browse and install Plasma widgets from KDE-Look without opening a browser. Unfortunately, clicking Install seems to only change the button to say Uninstall without adding any new widgets.

I remember trying out KDE 4.0 when it was released and having all sorts of minor problems. KDE 4.1 has been much better. I did immediately have one issue with text files not being associated properly with KDE’s text editor. This bug has been reported, but none of the workarounds have fixed the problem for me. I’m guessing that issues like this will be fixed quickly as Ubuntu’s new KDE 4 packages get tested.

Read the KDE 4.1 announcement for more on what’s new, and screenshots.

[update] I just noticed that installing KDE 4 will change the USplash (graphical boot and shutdown) theme to Kubuntu. Run these two commands to switch back to the Ubuntu theme, the first will prompt you to select the theme you want:

Wow, I didn’t know that you could install both Gnome and KDE - I’ve never seen a reason to try KDE (as I’m perfectly happy with Gnome) but now I’ll give it a test run. Thanks!!

Hi Tom!
I cannot download Ubuntu, so I wait for the CDs to be shipped. I tried KDE 3.5 but hated the complexity of customisation. KDE 4.1 looks promising. I would like to install KDE 4.1 once it gets available with Ibex Live CD.
My question is:
How to install Kubuntu over Ubuntu using Live CD. Wubi uninstalls one while installing the other.
Also how to upgrade using live CD.
Can I install Amarok on Ubuntu using the Kubuntu Live CD?
Thanks.
I have discovered a hack by which I won’t have to download the apps like VLC when I reinstall. And it doesn’t require you to copy the Home folder. I will post it later.
Bye.

Does this have any odd or possibly unwanted side effects?

The widget trick is neat! It played another one too: http://digg.com/linux_unix/KDE_4_1_Does_Not_Work

“Open System->Administration->Software Sources”
FAIL. There is no “Administration” selection to be made under system on my Hardy box. :-(

iampriteshdesai:
I haven’t tried this myself, but you can add an Ubuntu CD as a software source with the Add CD-ROM button in Software Sources. Then you should be able to install any software that’s included on the CD, or upgrade to the version of Ubuntu included the CD.

Matt:
Installing KDE isn’t likely to cause any problems, but if it does you can always uninstall.

Wolfger:
You’re probably not running as a user with sudo privileges. Try logging in as the first user you created when installing Ubuntu.

Make sure you use aptitude to install that metapackage, because it’s not very easy to uninstall without that.

So instead of using the apt-get command above, use:
sudo aptitude install kubuntu-kde4-desktop

I’m still having a few problems with my desktops, wondering if you have any advise for me?

The desktop appears in the 1024x768 region, and to the right the remainder is available but has XXXXX as the background. I can place widgets in the area, and applications go full screen fine. However the desktop being misplaced is bugging me.

Screen appears blank, with the mouse pointer as an X. Can’t do anything with the screen at all. In Gnome it appears as a complete second desktop.

My real problem is that I don’t like to misc together ubuntu and kubuntu stuffs. For exaple, there will be two entries to configure the screen, two entries to navigate on the web (firefox), etc
I would like to install kde4 or kubuntu, but I don’t want my stuff from ubuntu!
any ideas?

Grat post, thanks. I would never have bothered trying KDE if I hadn’t read it.
While KDE looks and behaves very nicely in certain respects I somehow prefer the look and feel of gnome - I guess there are pros and cons to both.

Anyway, after giving it a run through, and then wanting to uninstall it, I did apt-get remove XXXXX for each package I installed. What this didnt do was get rid of Konquerer, Kopete, etc.

I had to manually uninstall each from synaptic package manager which was a bit of a drag. Is there a way to get it to auto remove everything it installed for KDE?

Isn’t aptitude outdated? I’d thought for some time down apt-get autoremove would remove the metapackage and all it’s dependencies?

Hey, how do I uninstall it though? I tried it out, and it’s not for me, but it came with a gazillion apps that i want to get rid of. is there a way to do that or am i stuck with unneeded apps?

Also, it seems that wicd, which is the network manager that I use, has been completely removed, which is odd.

help would be greatly appreciated…

The reason wicd was removed is that it conflicts with kde’s network manager, does this mean that other programs that conflict could have also been removed without any prompt whatsoever?
This seems like it would need a disclaimer at the very least..

I have run KDE 4.1 on my Ubuntu system for a few days now, and it has worked great for me. I personally find the default theme beautiful, and I impressed by the level of innovation.
On top of that kde 4.1 is - at least on my laptop - a lot faster than both 3.x and gnome. So I am not switching back.
I do however wish, that Ubuntu would give more attention to the KDE-desktop. Much more resources have gone into integrating the gnome-desktop than the KDE-desktop. As a result Ubuntu (Ubuntubase+gnome) is somewhat more polished than Kubuntu (i.e. Ubuntubase+KDE).

To remove any programs which depend on another one that you have already uninstalled, open Synaptic, click “Custom Filters” in the lower-left of the window, and then select “Orphaned”. Hopefully this filter will show you all of the remaining programs that were installed along with KDE.

Thank You very much!!

Thanks Tom, I installed KDE 4.1 last week but hated the fact that my favorite GTK apps like Firefox looked like crap, I am sure glad you tip helped me out again. Even though gtk-qt-engine isn’t perfect, but I am more than sure it will get there. :)

Removing KDE is really a pain in the ***, once installed. Thanks for the “Orphaned” tip, Fevrin!

Tried the KDE 4.1 and eye candy is cool but netwrok does not work. Works fine in Ubuntu/Gnome so I uninstalled and think I’ll stick with it (Gnome/Ubuntu) unless someone has very simple instrution for making the network work

Can you tell us if the repository that you mentioned to install KDE 4.1 will provide updates available with the rest of the regular updates? It doesn’t look like a regular Ubuntu repository, and since I decided to use KDE 4.1 in a regular basis and there is a lot of stuff that doesn’t work very well, I need to get updates as they come.

Toplus:
Yes, that repository should provide updated packages. We’ll be likely to see some improvements when KDE 4.1.1 (the next maintenance release) is released.

thank you..i had port your link in my blogspot ..

Gave it a shot, didn’t work for me. When I tried to get back to Gnome, it wouldn’t boot X.
Oh no! Somehow I got it back and dumped everything KDE on the machine. I’ll stick with Gnome for now.

Now when running the apt-get commands above, apt-get wants to bring back my OpenOffice 2.4. How do I persuade apt-get to NOT re-install OpenOffice 2.4?

Hey Umm Thats Awesome I Tested it But AnyOne Know If You Can Do That To The Server Edition Of Ubuntu?

That’s something like:
“«kubuntu-kde4-desktop» couldn’t be installed. (E: Problems couldn’t be corrected,you have retained broken packages”.) What could it be?