GNOME has launched an alpha of the GNOME Shell Extensions website. Like Firefox, GNOME Shell allows extensions to modify and extend the user interface. The site allows you to browse and install extensions written by third parties, but reviewed by GNOME before being made available. There are already many extensions to bring back elements of GNOME 2.

To try GNOME Shell Extensions, you’ll need to be running GNOME 3.2. Ubuntu 11.10 only has GNOME 3.0, but the GNOME3 Team PPA provides packages to update it. I added this PPA on my netbook to updatemy existing GNOME Shell installation in Ubuntu 11.10.

Extensions are installed using a plugin, included with GNOME, that currently only works with Firefox. When it’s working, an extension’s page has a large switch to enable and disable the extension. Flip the switch, select Install in the confirmation dialog, and the extension almost immediately activates. Disabling an extension is just as easy. Here’s the Applications Menu extension in action: 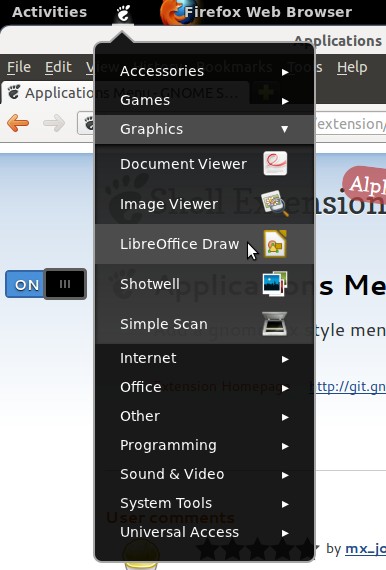 I’d like to see an extension that maximizes screen space on my netbook by hiding the title bar of maximized windows like Unity does.

Could GNOME Shell extensions become a killer feature for GNOME 3?

This is not so much a ‘killer feature’ as it is a return to being usable. GNOME might have had lofty goals with ver 3, but the end product made it harder to do work than GNOME 2, and so it *felt* like a step backward.

If these extensions can make GNOME 3 operate like GNOME 2, they’ll be in a much better position.

It works well, extensions can be handy, but GNOME2 did not come perfect out-of-the box either so stop whining…

As long as the window manager and gnome-shell are tied together people are going to continue to dislike it because then you just can’t use compiz, I myself will be upgrading to 11.10 soon (haven’t got a lot of time lately) and I’ve been doing a lot of tweaking in VMs to get gnome-panel working with compiz again cause let’s be honest: where the wow-factor without compiz and I also just need my nice effects!

This is a big unfair little concept of the gnome guys, they purposly broke compiz by not using a communication system between the windows manager and the shell but just made them into one big blob, I don’t understand why, I used to love the gnome devs, now I don’t know anymore :S

More info in this old but still correct blogpost: http://www.stefanoforenza.com/compiz-is-getting-rapidly-sick-of-gnome/

Using Mint 12 and having combined Gnome 3 (shell) with a mixture of desktop managers (like Cinnamon, LXDE, Awesome, KDE, Openbox etc.) I am still unconvinced of Gnome 3 shell. Why Gnome decided to use the already obsolete Clutter to stifle its desktop and kill nearly all acceptable effects that users like so much, puzzles me. Cinnamon is an interesting experiment to efficiently return beloved Gnome 2 aspects into G3s. Yet, having viewed KDE Plasma Active II I think Gnome 3 (and Unity) lost the battle for the desktop, even on smart-phones…, their primary targets!

Will this work with gnome fallback?

People should start to forget about this gnome shell, is dead from the beginning with its pity iPhone like approach to the desktop. That doesn’t works and it never will. It doesn’t works neither that the gnome developers thinks that users are stupid, that’s insulting.

If you want to use a real productive environment for your linux computer then use kde4 , ubuntu’s unity, mint’s cinnamon ,xfce, or whatever but gnome shitll!!

I will have to say that Gnome Shell has along way to go. I tried other distros such as Xubuntu and a few others before I finally moved to Mint 12. While Mint is not perfect, it has however made working with Gnome Shell better by way of the Mint Gnome Shell Extension which I really like. This combined with Docky and Synapse makes it so much better. As for Cinnamon, I’ll wait a bit longer before I use it on a permanent basis since there are a few things that don’t quite work well yet. Besides, I’m a wait and see kind a guy to see where the Cinnamon development goes.

I did my best to use gnome3 or Unity but there was no way for me to make them as efficient a desktop environment as gnome2.
I moved to Lubuntu / LXDE and feel very much at home. Simple but practical.
Change is not always for the better.
I am not sure why ubuntu or gnome refuse to admit that after the users have clearly voiced their opinions.

Now, I’m not sure that Gnome Shell Extensions is such a good idea but, lets see …
However I would argue for a Gnome Store with Gnome Application Guideline for strong integration of the system and interop in it.

Having tried gnome shell and unity, for a couple of weeks, found them both to be really annoying, perhaps I did not give them long enough.
However in linux mint 12 cinnamon have found a useful and easy way to work.
Whatever the fanboys of gnome shell say. its really unusable.