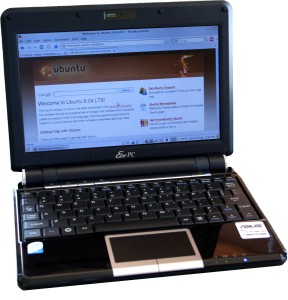 With previous releases it has been necessary to install a customized Linux kernel to add support for wireless networking, Ethernet, and more. In Ubuntu 9.04, everything is supported by default with the exception of some of the keyboard function keys.

The system feels much more responsive than it was with Ubuntu 8.04. Booting from bootloader to the login screen takes 20 seconds (35 seconds in 8.10). Battery life is approximately 4.5 hours (same as 8.10).

Installation is pretty straightforward, but here’s how I installed Ubuntu 9.04 on my Eee PC 901:

You may also be interested in my article on tweaking Ubuntu for SSD drives, although I haven’t felt the need to apply these tweaks myself yet because the system seems so much more responsive.

Have you tried the Ubuntu UNR on the eeePC? This is even more tailored to netbooks and so may get your function keys working, they worked on my eeePC (701)

Can this be installed without issues on other netbooks? I’m sick of the crappy customised Linpus Lite on my Acer Aspire One.

Yes, the install process should be basically the same for other netbooks.

Hi Colin,
Last night i installed Ubuntu Remix 9.04 on an Aspire One and the installation went perfectly, wifi works, so does the keyboard and touchpad, I didn’t check the function keeys though:( and no, I don’t still have the One it belongs to a friend who had windows on it and had problems getting it to run.

There is also alternate cd for Atom-based computers :
http://cdimage.ubuntu.com/ports/releases/jaunty/release/ubuntu-9.04-alternate-lpia.iso
The majority of the packages have been recompiled for lpia arch :)

Unfortunately, I’ve not such a computer, so I didn’t test…

Thanks, I didn’t realize there was another CPU architecture just for the Atom. I may have to give that a try.

One extra thing I’ve found useful, in the absence of a swapfile, is the “swapspace” package. This creates an “emergency swapfile” on demand, so programs don’t start failing if you approach the top of the RAM. Keeps e.g. Firefox from quitting, especially if you redirect its cache to a /tmp ramdrive.

You might have to watch your free disk space while downloading all the upgraded packages, but other than that it should work.

Does it include support to disable the wireless/bluetooth so it doesn’t drain the battery?

however, i am facing a difficulty:

there is a wpa(tkip+aes) router at my home and a wep router at my workspace. for the later, i can access easily after typing the password but not for the former…

i would like to know if there is any solution without reconfig the router…thx a lot!

How do you hibernate without swap?

I use standby or shutdown instead of hibernate.

Are you having issues with your bluetooth mouse, because mine will not pair. look here https://bugs.launchpad.net/ubuntu/+source/bluez/+bug/343727

Tom, nice post, shame I had to do this without it over the weekend.

I would suggest a couple of changes (based upon my 8.10 and EasyPeasy installations).

1) I would put root onto the 16Gb drive if you are going to install lots of applications, I ran out of space when I had it the way around you suggest. I don’t intend to have a lot stored locally, so 4Gb is enough for my home area.
2) I would suggest putting a swap (for hibernate support) but switching off the vm.swappiness to stop it being used for Virtual Memory. Also, if you have 1Gb of RAM, make the swap bigger than the default 750ish Mb.

Just wondering if you partition the 16G and install the boot system on the 4G. So this way you have the faster drive booting and home and usr directories on the larger drive.

Im not that familiar with ubuntu but with FreeBSD you’d put root on one partition then usr var and tmp on their own too. this way root can be small and apps and logs can be on larger partitions.

Where does ubuntu install all its apps and lib?

Ive just updated from using 8.10 to 9.04 and everything seems to work fine except I have no touchpad? Rather strange, seems to work for others, have you heard of this or seen any solutions when it does happen. It boots and then nothing happens unless I plug in an external usb mouse, the touchpad does not work.

Thanks for any suggestions.

This is for a Kogan Netbook but it should work for you :)

Did you use Ubuntu Remix 9.04 or standard Ubuntu 9.04 Remix seems to work well on Netbooks, well, on the Kogan and Aspire One anyway ;)

I have the same problem . As a workaround, at startup press de tab key, that shows all the init process, and the touchpad works!…

@Jim Maas:
If you were to provide details of what kind of netbook you were trying to install Ubuntu 9.04 on, someone might be able to help you. Without that info, you’re unlikely to get any assistance.

the wireless hotkey does not work ( no solutions found yet)

the array website seems to be developping à kernel for jaunty with some eeepc-netbook fintuning, this might be owrth the try.

thx brian for the swapspace suggestion

I installed 9.04 some time ago but had to do it using a CD because I had problems with the USB install (it kept saying the CD was still mounted even though there wasn’t one then).

I also installed eee-control to make switching the WiFi and bluetooth on and off a breeze:
http://greg.geekmind.org/eee-control/

I also installed the “tinymenu” add-on for Firefox which makes the browser much more user friendly by using more space for the web page and less for the menu/buttons.

pls help i downloaded 9.04 but i dont know how burn it into cd and how to install it

I have a question:

I have a bootable USB-Stick with Ubuntu 9.04. I want to work on the stick, because I have to change often computers, but I want to have my data on one stick.
Is it possible to use EEE PC 901 to boot from UBS and work on the stick?

Thank You very much for an answer.
Angela

Hi, I partitioned my eeepc the way you suggested in your article and it worked fine but now I get messages that the root partition (4 GB) is almost full. What can I do? I have a lot of space on my other partition (16 GB). I’m a newbie on Linux :-)