On March 26 Ubuntu 9.04 Beta was released. I installed it on my main desktop system as soon as it was available, so I’ve been running it for a few days now.

If you’re interested in trying out this beta release, remember that it’s intended for testing and not mission-critical systems. The release candidate is coming on April 16, and the final on April 23. Use the Bittorrent downloads to get your disk ISO the fastest! 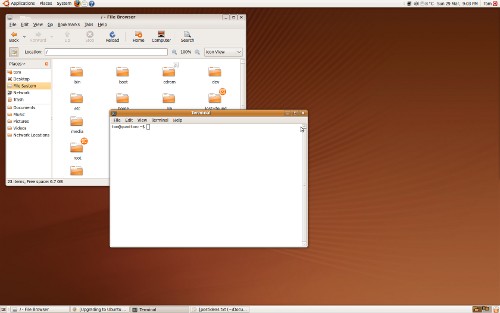 I always perform a clean install of new Ubuntu releases to completely remove old software and configuration files that have built up over the last six months. I use separate home and Ubuntu system partitions so it’s easy to install Ubuntu without wiping out my files. However, once I’ve booted the live CD I use the file browser to archive all the hidden application configuration files in my home directory so I get the new default desktop.

The new ext4 filesystem is now stable and included in Ubuntu but will not be the default for this release. After reading about the problems with ext4 wiping out files, I decided to play it safe and stick with ext3 for now.

The first problem I ran into is one I’m familiar with from past Ubuntu installations. The software repository mirror for Canada is so slow to respond that updating the package listings takes longer than the actual installation. I just browsed the Internet from the live CD and waited for this step to finally complete.

After logging in to the new system I tried to enable the proprietary Nvidia driver with the hardware drivers utility. I forgot about the unusably slow repository, so the driver download would not progress. I had to kill the driver utility to stop it from trying forever to download the driver, and then kill the backend process separately. After selecting a faster repository mirror I was able to install the drivers and download updates.

Since installing Ubuntu 8.10 I’ve never been able to work out the audio glitches. Things don’t look much better in 9.04 so far. Firefox will randomly stop playing sound, and then hang when I close it to restart. Also, the first time I logged in I got crackling and static sounds and restarting PulseAudio fixed it. I’ve never had this particular issue before, and it hasn’t happened again, so I’m hopeful that it was a one-time problem.

Ubuntu doesn’t crash often for me, but when it does it’s usually caused by a 3D application. I’ve played Civilization 4 via Wine on Ubuntu 8.10 for a long time without a problem, but the first time I started playing in 9.04 ended with a crash. My monitor actually lost it’s signal after the crash, which would suggest that the Nvidia driver is to blame. The magic SysRq key combo, Alt+SysRq+REISUB, allowed me to safely reboot. I hope that the newer Nvidia driver isn’t less stable than the old one.

If you’ve tried the beta, how’s it been for you? Any new features in particular you like?

The last one is not true. They were gonna do that, but a bunch of people whined because their text changed sizes. They’re forcing 96 DPI again.

I’ve been running Jaunty on my Macbook for about two weeks, and I’m really liking it!!
After installing with ext4, my windows 7 partition was unbootable. Now its a share partition between Leopard and Jaunty. Oh well.
I like the new notifications, I really hate balloons.
I dislike(of course) the default brown theme, but I’ve got some other beautiful themes on there, which I switch up when I want a change.
I get boot speeds of 24 seconds from grub to login window. Its even faster than Leopard!!!
Thanks for the blog, I really enjoy it!!

hi,i have been using jaunty beta since day 1.
i am impressed by a few things on jaunty beta

2. compiz, for the first time ran out-of-the-box. i hhave an ati radeon x1400 graphics card. previously i had to install fglrx before compiz would say yes. now i can have wobbly windows without proprietary drivers!

3. divx, avi, mpeg videos doesnt flicker at all. its such a good feeling. no need to turn off compiz now.

6. no serious crashes for me yet.

but not without drawbacks.

1. menu doesnt update for new installed applications for wine
2. alacarte crashes while trying to edit
3. empathy messenger doesnt play sounds even if it is enabled.
4. skype doesnt detect my mic somehow. cant call on skype( need to do a better research thought)
5. desktop icons doesnt show up properly when now programs are installed

oh forgot to say about the suspend and hibernate feature.

i get a feeling that these two features have been improved considerably. i have been using them extensively. and not once have i had a crash. and no graphic distortion. no wifi problems and no sound server crash yet. it runs just like as if it has just been turned on . kudos to the developers!

Looks like you just missed a new stable NVIDIA driver :-)

The freezes are random, and I can’t make them repeat. Other than that, Jaunty is really smooth for me. I love it.

hi
i just installed the beta yesterday but i switched back to hardy after i tried EXTENSIVLY to get any sound without success. Not even the Test-button in the sound preferences worked. i have a creative audigy2.

I too had the crackling sounds and sound issues, I found a way, that for me at least, fixed them perfectly. Make sure your PCM volume is up, I noticed that after I updated from alpha 6 to beta it somehow auto-magically turned itself all the way down. After upping that volume, all was well.
So far I have had no problems with ext4 wiping files.

All in all, I love jaunty more then 8.10 the notifications ROCK, and I have noticed a slight performance increase with ext4.

Nice writeup. I must note that on my HP G50 laptop, I couldn’t get Ubuntu installed to save my arse. That is, until Jaunty beta. Worked like a charm, no real hassles. They even fixed the wireless issues without any intervention of my own. I will be working on the trackpad on-off button next, as it changes colors, but doesn’t actually turn the trackpad off.

From one ‘tom’ to another…
Keep up the good work!

I tried it on another HD this weekend.

It definitely sports improvements here and there. I can’t help but think that it is a bit “boring” - Ubuntu already does everything I need, how I does it, and everything “just worked”.

I guess that’s how an OS is supposed to be though and I like it. After all, the focus is on applications.

The ext4 issue in question is marked *fix released*

There’s a lot of discussion, but it seems that fixes have been backported to jaunty as described in this comment

What about on your EEE? Very interested to see if vanilla 9.04 will work or will we need the array.org kernel.

I’ll be writing about my Eee soon. So far it looks like Jaunty works perfectly without any extra setup.

I am enjoying it. For me, the sound improvements were big…one of the first thing I noticed besides the boot time. The only thing that bother me was the removal of the update notification icon and switch to open update manager after seven days. At least there is an option to bring it back. Also wish I could configure the notifications, change open from top right to bottom right.

No other real issue/crashes here.

Sound issues in Ubuntu? My linux-using office-mate says that Ubuntu is light years better than Vista (which I use). But you can’t get sound to work?

works great for me except one simple thing that means I won’t be changing to it any time soon, is no sound :(

Seriously people just learn to use the pulse audio set up it’s really not that hard. I first ran in to problems with it on Hardy. Although I struggled at first, eventually I got it working. Now when I install Ubuntu it only takes a few minutes to get it up and running. I have had it fully operative with Hardy, Intrepid and Jaunty running Bose companion 5’s.

hey, what generation of macbook are you running with 9.04?

I am 15 min away from installing the new beta on a clean HD. I like the posts I have seen so far. I just started using 8.1 and am liking it.. exept the hardware issues I am having. But I am new to Ubuntu and have much to learn lol

Well. I downloaded the beat and installed it on a 100 gig sata drive. Install went very quick. And like you guys said…. super fast boot. but so far I noticed no support for flash player yet. other than that. I looks and runs great.. except for the same hardware troubles :-(

My wobbly windows do not function correctly. :(