It’s not likely that Flash Player 10 RC will make it into Ubuntu 8.10 because of the feature freeze. 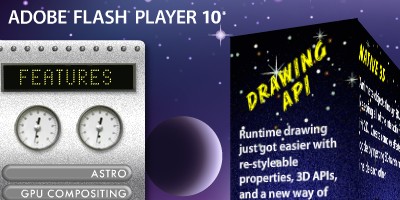 If you want to try the new Flash Player, first remove any previous versions if you manually installed them. If you installed it from the repositories this is not necessary because the new package will replace the old one.

Install the package and restart Firefox to start Flash 10 Beta.

I found the previous beta 2 release to be unusably slow and buggy. Fortunately, Adobe must have fixed the problem because this RC is working great! I can now play YouTube and even Vimeo HD videos fullscreen with Flash without any trouble.

The only issues I’ve had so far with some websites that can’t yet correctly identify Flash Player 10, and Wordpress’ Flash uploader.

If you do have trouble, downgrade back to Flash 9 by uninstalling the package and reinstalling from the official Ubuntu package:

In other Flash news, this page, written by a Flash developer was linked to from Adobe’s Linux Flash Player blog. It hints that Adobe has developed a 64-bit Flash Player for Linux and FreeBSD.

Do you mean that this won’t get into Ubuntu *8.10* because of the feature freeze? If so, that’s unfortunate.

Does Flash 10 fix the problem of sound issues that flash has had in hardy? Or the problem of flash crashing firefox? Just wondering, ‘cause i’ll definitely upgrade if it does.

Hm…? Looks like a type.
It’d be kinda sad though if it wouldn’t get in.
(Or at least that sound issue *really* has to be fixed.)

It’s not likely that Flash Player 10 RC will make it into Ubuntu 8.04 because of the feature freeze.

First, do you mean 8.10? If that’s the case, I hope you’re mistaken. They’ll just need to do an exception to have it upgraded in the repos. Haven’t they already packaged the beta2 into the intrepid repos? Now getting that backported to Hardy, I have no idea how that works.

Scott Wegner, Ryan Orser, Christopher Denter, Jonathan:
That’s a typo, I meant 8.10. Thanks for pointing it out. I do know my Ubuntu versions by heart, it’s just tough to keep them straight when writing a post about more that one version. :)

ben:
Flash 10 should work better with PulseAudio, so it should solve your sound issues.

I had installed a fresh Ubuntu 8.04.1 a while back and have had no problems with flash 9, although it does seem to take up a chunk of CPU, not enough to slow the computer though.

I installed the RC last week. And on the few videos I managed to watch, the player worked better : flawless and fullscreen playback, no more CPU hogging. But then, it started causing my browser to crash. On almost all flash content I tried to load. My GPU is an nVidia GeForce 8400M.
I was obliged to switch back to flash 9.
Has anyone experienced the same issue? I have filed a bug on adobe labs website and I really hope they’ll fix that issue in the final version.

@ben: My experience is so far, so good. I had a LOT of trouble with audio in flash an the seemingly random crashes of Firefox, but everything has been flawless since I installed this.

I fixed the audio problem with Flash 10. I followed the bug fix https://bugs.launchpad.net/bugs/198453 Check the Resolution part.

It worked better on some things, but crashed weather.com. This being hurricane season, that’s a non-starter.

Tom, Thanks so much for pointing this out. I tried it and INSTANTLY dugg it! it has fixed EVERY issue i have and i have had only 1 crash (i was testing pretty hard) thanks for making such a great blog to help us get the most out of this awesome operating system!

Yes, thanks for writing bout this. So far RC is working way better than beta2.

I installed it and loved it right away but then youtube vids wouldn’t work. so I then went back to 9, and that didn’t work! So I reinstalled 10 and it worked great but it looks like everytime I start up Fx again, i have to reinstall it, very odd.

I have installed Flashplayer 10 RC on a Ubuntu 8.04 with Firefox 3.0.1 and www.legoland.com makes Firefox crash.

For Ubuntu 64 bit users there is a simple 2 click install for Flash 10 RC at http://www.queleimporta.com/how-to-install-flash-10-rc-on-ubuntu-64-bits-with-2-clicks/en/

i am so happy to try out flash player 10

flash player 10 and Ubuntu 8.04.1 make Firefox almost flawless on youtube. Unfortunately it make my browser to crash on almost any other page :(

i am so happy to try out flash player 10