If you’re upgrading from the version of VirtualBox you get from Ubuntu 8.04’s repository to the latest version from Sun, there are a few issues that could trip you up. I was doing this recently in order to run the latest Ubuntu alpha releases in a virtual machine, more on that in the second half of this post. 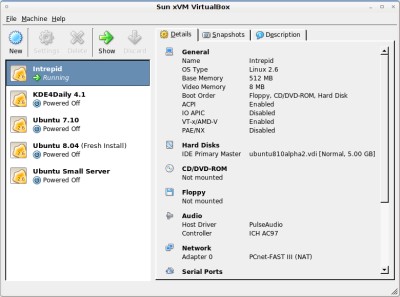 Since Sun Microsystems purchased the company behind VirtualBox, they are now providing packages for Ubuntu 8.04 through their website. If you have an older VirtualBox installed from the Ubuntu repositories, installing Sun’s package will fail.

The first problem is that because Ubuntu’s package has a different name, virtualbox-ose instead of virtualbox, APT doesn’t know to replace the older package with the new one. APT is smart enough to see that there is a conflict and will give a virtualbox-ose conflicts with virtualbox error.

Removing the virtualbox-ose package will fix this:

The second problem is that Ubuntu provides some other VirtualBox packages that will also conflict. You may see an error similar to this:

This can be solved by removing all of the VirtualBox modules packages. If you’ve had VirtualBox installed for awhile, you’ll have one of these packages for each kernel update you’ve received. This command will remove them all:

Hopefully the install was successful that time!

The next time you start VirtualBox it will ask you before upgrading your VM settings files for the new version.

If you’ve installed KVM, you may run into another issue when trying to run a VM. I got the VirtualBox can't operate in VMX root mode. error until I uninstalled the package kvm. My guess is that KVM is running in the background with the kernel and is doing things with my CPU’s hardware virtualization support that conflicts with VirtualBox 1.6. 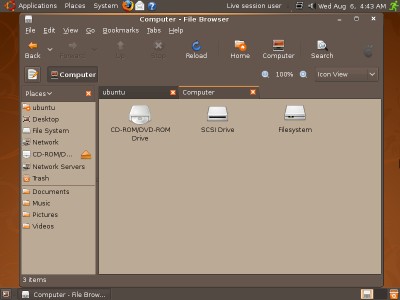 The reason I upgraded to the latest version of VirtualBox is that I’ve been wanting to virtualize the Ubuntu 8.10 Alpha releases, none of which I have been able to boot due to a kernel panic.

The only workaround at the moment is to run the VM with the latest versions of VirtualBox and with VT-x/AMD-V hardware acceleration enabled. This requires that you have a supported CPU, and that this support is enabled in your BIOS (it was turned off by default on my PC). If running this command produces output, you’re ready to go:

Open the settings for your VM and select the Advanced tab. Select the Enable VT-x/AMD-V option. Be careful, there are actually three states for that check box. If the check appears gray, click it again to make it black.

This should allow you to boot the Ubuntu 8.10 Alphas and use them without further trouble. This worked for me with the Alpha 3 desktop CD, I was able to complete the installation and the installed system also works fine.

There are a lot of problems with VirtualBox and the latest Intrepid alphas right now. The biggest one, as you mentioned, is the kernel panic that many users are receiving. To reiterate, you are currently only able to boot if you enable the VT-x/AMD-v option, AND your CPU actually supports the virtualization (and is enabled through your BIOS).

Another major hang right now is VirtualBox’s guest editions. As of Intrepid alpha 2, the Xorg guest additions won’t be installed, meaning that you will be stuck in 800x600 resolution (and without any of the other cool features, such as seamless desktop).

Can’t wait ‘till these issues get sorted out. It’ll make the testing experience much more enjoyable.

I installed kvm before, but removed it since… however after each reboot I have to do “sudo rmmod kvm-intel” for virtualbox to work. How can I have that done automatically? (or not load the module to begin with)

Vadim P.:
You could try adding kvm-intel to /etc/modprobe.d/blacklist. That should stop it from ever being loaded.

Just in case some readers are confused, the package in the Ubuntu repository is an entirely different edition than the main package available from Sun’s website. The so-called ose (open source edition) supplied by Ubuntu is cut down and most notably has no usb support. The other edition is closed source and has more features including usb support. Both editions cost nothing to non-business users so unless you are an oss purist just forget the Ubuntu package and install the closed one from Sun’s website. For updates install the latest full closed edition over the top of the previous closed edition.
Having said that, installing VirtualBox is not for newbies so be prepared to use the manual and forums.

Hello, what is the metacity theme and emerald theme in the last screenshot?

You are not limited to 800x600 if you edit xorg.conf and add mode lines.

You don’t have to completely uninstall KVM in order to get it to work, all you need to do is before you run virtualbox just do:
“sudo rmmod kvm-intel”
or kvm-amd if your processor is AMD.

That way you can keep both KVM and virtualbox installed (I like KVM because of the ability to run the “Ubuntu MID” KVM module. I think I like MID better than the Ubuntu Netbook Edition.

ariel:
The last screenshot is the new theme in the Ubuntu 8.10 Alphas, I think it’s called NewHuman.

I’m using fluxbox and this version of VirtualBox has not been automatically added to my fluxbox menu butI don’t know the command to run it since virtualbox launches the repository version not this one.
How to I run it from the command line?

I still get a kernel panic with VT-x enabled or not.

Kendawg:
The command is “VirtualBox”, the “v” and “b” have to be capitalized.