VirtualBox is open source virtualization software similar to VMware. I wanted to run a virtual Ubuntu LAMP server for testing, but I ran into a problem with VirtualBox.

Ubuntu Server has its own kernel which has PAE (physical address extension) support. This is not supported in VirtualBox and prevents the virtual Ubuntu from booting. Using Ubuntu’s recovery mode it is possible to install another kernel which will work in VirtualBox.

[update] Since version 1.6, VirtualBox now includes experimental support for PAE and Ubuntu’s server kernel. If you’ve updated to the latest version of VirtualBox then enabling PAE support for the virtual machine should allow you to run Ubuntu server without installing a new kernel.

After installing Ubuntu server in the virtual machine, boot off the CD again and select the Rescue a broken system option. 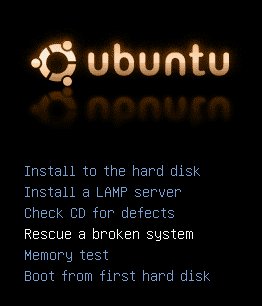 Answer the various language and keyboard questions when you are prompted. After the installer detects your hardware it will ask you to select the root file system from a list. For me, the root partition was the first one in the list. Then select Execute a shell in [partition]. Select continue and the shell will start. 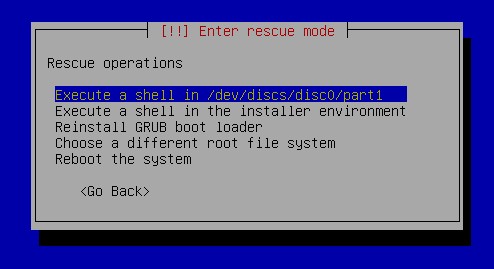 Run these commands to download the package list, install a new kernel, and remove the non-working server kernel:

Close the shell by typing exit and selecting Reboot the system. Enjoy your virtual server!

This doesn’t work for me. It’s all going well until the final step when I try to select “reboot the system” and get a blue screen with “_pSLsys_getkey: EI0 error” plastered all over it. I have to then shut down the virtual machine and restart it…but it then has to undergo error fixing and doesn’t work properly.

clunknjunk,
It looks like that is a bug in Ubuntu:
https://bugs.launchpad.net/ubuntu/+source/rescue/+bug/60423

It works for me in Ubuntu 6.06 LTS, and for other versions there seems to be a workaround by pressing Alt+F2 to reboot.

Hi Tom,
I tried to Alt+F2 at the menu screen but instead of rebooting it took me to a console marked:

I managed to reboot the system by typing in ‘reboot’. But once again, when the system booted up it said that it had failed to unmount properly, check forced, errors, reboot again.

Quite an unusual bug…surprised that it hasn’t been fixed considering it has been known about for some time. Thanks for your help though!

If your running the new ubuntu 7

you mite want to try

Using
apt-get install linux-generic
did NOT work for me.

FYI, this works for me for this error from ubuntu 7.10 on virtualbox:

Worked great for me.

Thank you for the tip it worked very well for me.

I had the same problem in Ubuntu 8.04 LTS Server

I don’t know how long this has been in VirtualBox. But anyway when you go to the Ubuntu server VM’s settings, there is in the general settings>advanced(tab)>PAE/NX switch…

Is there a way that you can get the updates on the main machine instead of having to download them from the internet via apt-get update?
For some reason my virtual machine doesn’t seem to resolve names eventhough I can ping the outside world.

So i’d like to get the files on to the machine that is running the virtual instance and get it from there to update the kernel. is that possible?

Many thanks for your help,

I am trying to install an Ubuntu v6.06 LTS server to test upgrades to v8.04 LTS. Per the Update in the post, I went into VirtualBox 1.6.4 and turned on PAE/NX Under General->Advanced and the server booted right up with no changes. On to complete the updates.

thanks for the update! Once I found this post and enabled PAE, I was able to boot after installing Ubuntu Server 8.10.

Thanks a lot!! Worked great for me.

I don’t know how long this has been in VirtualBox. But anyway when you go to the Ubuntu server VM’s settings, there is in the general settings>advanced(tab)>PAE/NX switch…)

This solution worked for me, but I needed to choose the appropriate kernel when booting: pressed ESC to enter the GRUB boot menu and select the -generic kernel. I’ll try editing /boot/grub/menu.lst and make this the default kernel. I realised this after seeing the Trac page for a bug in the installer.

I just posted a solution on my blog for getting Ubuntu Server 9.10 to run on Virtual PC in Windows 7: