Google has released a platform for running their widget applications (Google Desktop Gadgets and web-based Universal Gadgets) on Linux. Google Gadgets for Linux is an open source project, and includes front-ends for GNOME and KDE environments.

Google Gadgets for Linux provides the largest missing feature from the Linux version of Google Desktop, which includes gadgets only in the Windows and Mac OS versions.

Compiz desktop effects or another compositing window manager are recommended for running Google Gadgets. Note that Google Gadgets is still in a development stage. You may also be interested in Screenlets, which can also run Google’s universal gadgets. 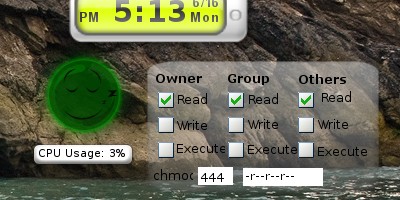 GetDeb.net has an Ubuntu package of the latest version of Google Gadgets. Download the package, and double click the file to open the installer.

An unofficial repository for Google Gadgets is available. Unfortunately, this repository has not been updated at the time of writing to the latest version (0.9.3) of Google Gadgets, which includes some important fixes. I’ll leave these instructions here also for when the repository is updated.

Close the Software Sources dialog and when prompted, reload the software repositories.

Install Google Gadgets for Linux from the package google-gadgets (click the link to install), or by running the command below in your terminal:

You can run Google Gadgets from the Run Application dialog (Alt-F2), or from the terminal with this command:

The -ns option disables the sidebar, which I have found to work very poorly. Remove this option from the command if you want the sidebar.

Once Google Gadgets is running, you can control it from the notification area icon. Right click on it and select Add Gadgets to get started adding Gadgets to your desktop. 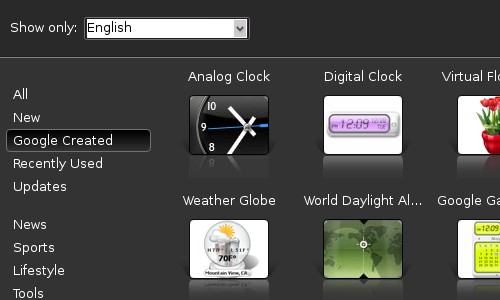 Just like with Screenlets, you can use Compiz’s Widget Layer plugin to get an effect similar to Mac OS’ dashboard. You will need to have the Advanced Desktop Effects Settings tool (CCSM) installed, and be using the custom desktop effects level.

Your gadgets should now be hidden. Press F9 to toggle the widget layer to show and hide them.

Sweet. I’ve been waiting for a good while to have a Google Calendar widget/gadget/whatever on my desktop that actually works properly.

Say, is anyone else having trouble getting any of the weather gadgets to work for cities outside the U.S.?

Good to have you back.

Nice how to, I am currently using Screenlets and will do so till this become more stable. :-)

“Error: Dependency is not satisfiable:
libmozjs0d”

And Hardy doesn’t seem know anything about the file!

What happened to the post yesterday? You were gone for two weeks and now you are not even posting everyday.
Thats not cool man.

Hey Tom, I love your site and I come back every week to see whats new. I just installed Google Gadgets and I love it thanks for the help. I recently created an Ubuntu blog. I was wondering if you could add it to your blog roll, I have your link on mine.

Great post. Is there anyway to run the configure/add apps program without the notification icon? I run AWN and have Gnome Panel disabled.

You’re missed, but I understand. Good luck with your school work!

Soooo….is this blog still active. Seems like school should be over :)

will you be re-activating postings?

Tom, long time no see. Just wondering if everything is OK with you.

Yeah you are back! Yet again, nice article

Ace:
libmozjs0d should be available in the universe repository.
http://packages.ubuntu.com/hardy/libmozjs0d

why i can not install it

“Error: Dependency is not satisfiable:
libpango1.0-0”

Google Gadgets for Linux 0.10.3 has been released. And the HowToBuild document has been updated to include tips for major distributions.

hi, about the google gadgets, ready now for download ? and or updated ? i am about to install the ubuntu 9.10, i want to see what i can add to my machine after installing 9.10.. are they easy to install like click and save ?
thanks !

Install Google Gadgets from GetDeb
GetDeb.net has an Ubuntu package of the latest version of Google Gadgets. Download the package, and double click the file to open the installer.

The link is broken. this is the message i get every time:
Oops! Google Chrome could not connect to getdeb.net
Try reloading: getdeb. net/ app/ Google+Gadgets