Websites very likely won’t be taking advantage of these new features until the stable release is out, so Adobe has a page of demos you can try.

Two large complaints about Flash on Linux are fullscreen video and 64-bit support. Neither have been resolved in this release. Playback of fullscreen video (which causes low framerates and high CPU usage) seems to be only slightly improved. I have found that there is a general performance increase. 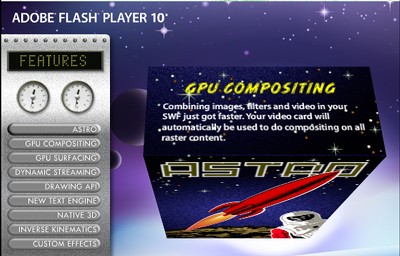 If you want to try Flash Player 10 you can download and install it yourself, but here are some terminal commands that you can copy and paste to get going quickly:

And here’s how to uninstall it:

[update] I’ve been using the Flash 10 plugin for over a week now, and the only issue I’ve had is the occasional website that thinks my version of Flash is too old.

Pretty cool. I definitely want to give this a try, since Flash 9 has been giving me so much trouble on AMD64.

I started an “idea” on Ubuntu Brainstorm to create a deb package in the repositories for Flash 10 beta. Give it a vote here:
http://brainstorm.ubuntu.com/idea/8681/

Supposedly, a deb exists for this. Or so their site says.

I guess 64bit people shouldn’t be trying this though, when flash was setup by ubuntu?

Use metacity instead of compiz and full screen videos work with no loss of framerate here. I hope it’s fixed so I can use compiz + flash soon.

I have it installed on both of my desktop/laptop and it works great. I am really glad the Adobe brought out a Linux versions with the other two.

Look at the bottom of the 1st post
http://ubuntuforums.org/showthread.php?t=772490

Darren, what you said is not true. Compiz-Fusion has nothing to do with Flash 9⁄10 full screen losing framerate. They are bugs within Flash for Linux because many people who *don’t* run Compiz get choppy full screen videos. This is because Adobe programmed Flash for Linux poorly. The fix is Adobe’s responsibility, but since it is proprietary, closed-source code (the very principal open source free software Ubuntu is trying to avoid) , no one can edit Flash in order to fix the problems.

The number one problem is that when you have DHTML menus that drop down into the region which a Flash video occupies, it falls “under” it, rather than over it as it does in Windows.

Slow full screen video performance can be solved by not using a shitty computer.

You’re extremely wrong on both counts.

There’s a toggle in the embed code to make Flash respect normal z-index layering, I don’t know it offhand, but look it up.

My computer has a GeForce 8800GT and a 2.2ghz dual core with 8 gigs of RAM. It can play Crysis at almost full settings, but it has trouble with fullscreen flash.

@ Anonymous
“Slow full screen video performance can be solved by not using a shitty computer.”

I couldn’t be ar*ed typing out my laptop’s (hi) specs, but your comment is total BS.

One problem I found with this version is that the new multiple file uploader in WordPess 2.5 no longer opens the file selection dialog.

Can you tell us?

Sure there’s a deb:

@Martijin: These DEBs are old.

For Ubuntu 64 bit users there is a 2 click installer for the latest Flash 10 RC at http://www.queleimporta.com/how-to-install-flash-10-rc-on-ubuntu-64-bits-with-2-clicks/en/