KDE 4.0.2has been released, as well as packages for Ubuntu. KDE 4.0.2 is the second bugfix release since the release of KDE4.

I updated my existing KDE4 installation to this release from the previous one, there were about 100 MB of packages to download. Read Five Steps to Install KDE 4.0 in Ubuntu 7.10 if you would like to install KDE4 alongside a normal Ubuntu desktop.

Then, I deleted my ~/.kde4 directory to remove all my KDE settings to start with a fresh desktop.

It’s the feature we have all been waiting for: resize and move the panel! Right click on the panel and select Panel Settings. You can select the size from some presets, or choose an exact hight. The panel can also be moved to the bottom, top, right, and left sides of the screen. 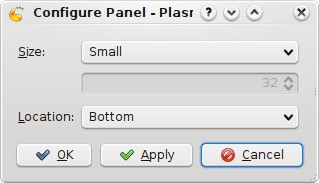 The controls for manipulating plasma widgets have changed. The rotation/scale control has been broken up in to two separate ones. Holding the control key while scaling a widget lets the aspect ratio be changed.

The main KDE menu has been tweaked a little, and I have been getting used to launching applications and Google searching by starting to type into the search box.

Many problems I had with previous versions of KDE4, such as the sudo password prompt, have been fixed. There are still some issues. The digital clock widget has still not regained the 12-hour time setting it lost in KDE 4.0.1. I have been noticing how sluggish Konqueror is while I am typing or switching tabs.

i lost my panel….nothing seems to help in KDE 4 in fedora 9….kindly help