If you have KDE 4.0 installed on Ubuntu, running an update should install the newly released KDE 4.0.1 packages. I’ve found them to be a good improvement over the initial release.

KDE 4.0.1 is a maintenance release which provides corrections of problems reported using the KDE bug tracking system and enhanced support for existing and new translations.

Wondering what’s new in KDE 4.0.1 on Ubuntu? Here’s what I noticed after updating: 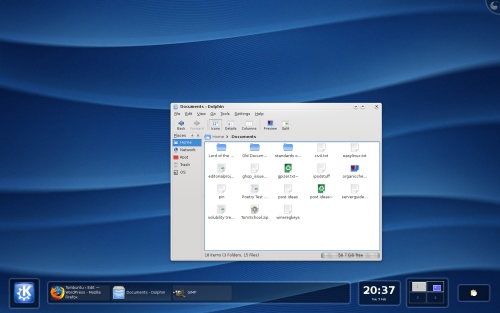 I’ll be back using KDE for a while, so I’ll update this list if I find any more significant improvements or bugs. Can someone tell me if the resizable panel made it into KDE 4.0.1 on Ubuntu? I can’t tell because I have the panel removed.

So far, KDE 4.0.1 has fixed some of my largest problems with using KDE 4.0. How’s everyone else liking it?

Hi Tom,
I just added the updates to my KDE4 install, and I can confirm that the resizable panel is NOT in this update. That is one of my dislikes so far - 1st thing, I always make the panel tiny.

Other than that, I can confirm your above findings.

PS - I like it so far. I’m still not using it exclusively (I use KDE3.x) for my everyday work, but it’s very nice and I look forward to it being a stable DE.

Really liking it. While I’m still sticking to Gnome as the desktop enviroment, I use Kate & Dolphin quite regularly now.

And KSnapshot trumps the gnome version.

I like the concept of KDE4 but the bottom bar is a deal breaker. I am sticking with Gnome. Compiz + AWN + Gimmie is truly awesome. IMHO KDE cannot touch that combo.

Still not liking it. The system tray widget doesn’t work right, plasma crashed on me three times (or, actually, crashed twice and black-screen-of-death once), and each crash undid all the changes I’d done to that point. KDETwitter looks cool, but is too big to be usable (can only fit last 3 twitters on a 1680x1050 monitor), and doesn’t seem to be able to *post* twitters… I really can’t wait for KDE 4.1 to arrive, so we can get out of Beta.