Command line Git can pale in comparison to fancy web interfaces like GitHub and Bitbucket. Using these sites lead me to look at some of the graphical Git clients available in Ubuntu. I’m far from a Git expert, and I haven’t spend much time playing with these yet, but here’s what I found: 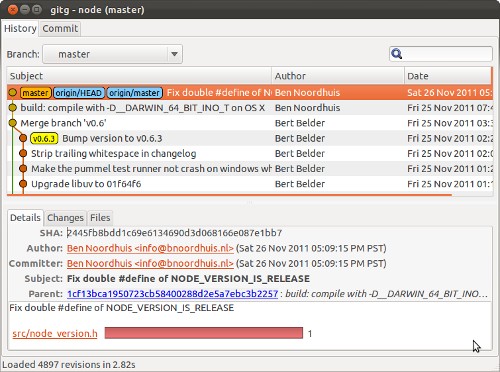 gitg is the most promising tool for my purposes. It combines both gitk and git gui-style interfaces in one program. I wish it it had an easy way to push to a remote repository - and there’s only a fetch button that’s tucked away in the File->Repository Properties dialog. [Update It’s possible to push after all: right clicking on a branch label in the commit log will show more actions. The branch labels can also be drag-and-dropped on each other.]

I’ve been using qgit for a long time. It’s not perfect but is not ugly :)

So far best GIT GUI so far is definitely SmartGIT. It’s unfortunately commercial but free for non-commercial use.

I’ve checked all GIT UI’s that was in the repo but only after installing this one I got what I wanted.

There is also RabbitVCS, that supports with a single GUI many version control softwares: