I haven’t had time yet to rebuild my main system with Ubuntu 11.10, so I did a fresh install on my netbook to try it out. My Eee PC 901 originally shipped with Linux, but it was very Ubuntu unfriendly until 9.04. Since then, all the hardware has been well supported by Ubuntu. 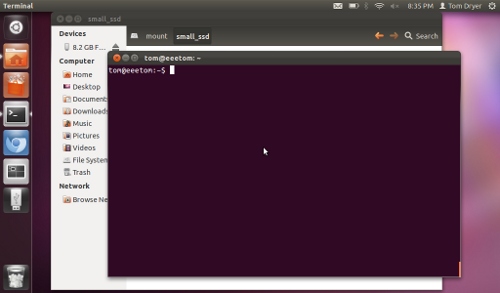 As usual, I ran the installer from a bootable USB drive created with Ubuntu’s Startup Disk Creator. Ubiquity, the Ubuntu installer, is more polished than ever in this release. It can now turn on the webcam to take an account picture, which worked perfectly with the built in webcam. I encountered two minor installer bugs: an incorrect report that the system’s name already exists on the network, and the window becoming taller than the screen.

I wish that I could have aborted the language pack downloads during the install. Since the repository mirror was slow, they took over an hour to fetch.

Disk IO seems to really slow the system down. The Eee PC 901 has dual solid state drives: one 4 GB and one 16 GB which is slightly slower. This time, I installed Ubuntu to the slower but larger drive because I’ve had trouble keeping enough free space while installed to the smaller one. I might have to switch back to the faster drive to speed things up again. Using Chromium is a big improvement to Firefox, which freezes up briefly while accessing the disk. Even without the disk issue, Unity feels a bit sluggish on this 3 year old netbook. There’s a noticeable delay drawing menus and opening the dash.

There are a few bugs to work out:

I’ve never had a problem with Ubuntu as severe as the kernel panic crashes. Fortunately I don’t rely on the netbook for much right now.

I updated my Starling Netbook and my backup desktop, and I have to say I’m not in love with 11.10.

In fact, I already installed the LXDE desktop on the netbook (the same desktop used by Lubuntu) and it’s much, much snappier.

On my Dual Core, 2.6 Ghz desktop (with Nvidia card) Unity and Gnome 3 have really failed to impress, and the “classic” fallback isn’t near as good as the Gnome 2.

The animations are very jumpy and it takes me longer to get things done, and I think Ubuntu (and Gnome) have made some questionable choices about this whole thing.

It’s bad enough that I’m considering ending my paid usage of Ubuntu One and moving to Dropbox, giving me an option to use Mint…

Many thanks Tom for sharing your experience with Ubuntu 11.10 on eee 901. I have had exactly the same experiences as you describe.

I’d like to add that the processor usage reported by system monitor was often 100%, I wondered whether all the changes in the new release had finally exceeded the spec of the humble eee 901 (?) - and so tried lubuntu 11.10…

The kernel panics still occurred and after all the bells and whistles in Ubuntu 11.04, Lubuntu 11.10 all seemed a bit ‘undernourished’.

In both 11.10’s the power management option to shutdown on lid closure was missing - plus shut down seemed an eternity compared with 11.04… And though I found a work around for the lid-down-shut-down on the forums, the kernal panics were intolerable!

I am for the time being now running Linux Mint 11 (based on Ubuntu 11.04 without Unity) and just hope that the next time I revisit Ubunutu (probably by the next LTR release), assuming my eee 901 is still working, I will try Ubuntu once more…

Shame really as I recently convinced 3 friends to install Ubuntu 11.04 on old PCs… I shan’t be recommending 11.10 similarly - but hey, it’s early days, I suppose!

Tombuntu, I’ve been a long-time reader and you’ve helped me out with a number of Ubuntu-related issues in the past.

I have 2 eee-pc 901’s (one for testing and the other is stable). The stable system runs CrunchBang Linux (Debian); I run the OpenBox version, but there is also an XFCE version. The OpenBox version runs lightning fast on my 901 and has not given me any problems. Might be worth a try.
http://crunchbanglinux.org/

your mouse issue might be caused by missing synaptics drivers for the touch pad(you can apt-get them). This happened to me when installing 11.04 from the alt cd. And after the upgrade from 11.04 to 11.10 I’m also having random kernel panics. Looking at my logs it looks like network manager is always doing something before the panic. I might be replacing my wifi card.

I have a eeepc 1000he. Although 11.04 unity 2d was perfectly acceptable, I was looking for something lighter. I installed Bodhi and I find it much snappier. It might be worth a try.

I upgraded from 10.xx to 11.10 and I deeply regret the move…
It is dam slow on everything.
I even have issues accessing internet - even with Midori it fails to load pages…
Firefox is simply taking ages (>5min) for a google page… awful.
I don’t know how to go back…
My Atom 4x1.5Ghz of the eeePC Seachell series is mostly at 100% load - never lower than 50% load system usage… ugly useless usage of power… Shame on developpers.

I managed to fix the kernel panics by picking up the 3.0.0-11.18 kernel, headers, image, from kernel.ubuntu.com, then removing the 3.0.0-12, change boot order in grub, reboot, and it should work. It did for me. Also, about the touchpad issue, I have not experienced this on mine, what were you doing when it happened?

To fix the touchpad issue

I’ve had the same issue with the touchpad on my 1000h. It randomly stops responding doing various tasks. Sometimes it lasts 5 minutes, sometimes it doesn’t freeze the whole day I’m at school. I don’t do anything crazy with this laptop since it’s just used for school and it’s basically a fresh install. The randomness makes it hard to fix. I tried installing synaptic, disabling the ‘disable pointer while typing’, etc., but neither worked.

thanks all for the comments. I have exactly the same not so positive impressions with Ubuntu 11.10 on my main beefed up MSI Wind U130 netbook (N455 Atom, 2GB RAM, 320GB HDD):
- Unity is sluggish (I like the dash though)
- Ubuntu Software center is extreeeeeeemly slow
- Same problems with touchpad not working some times
- few random kernel panics

I’ve also got the Eee 901 and experienced a similar problem with the touchpad.

> I had the touchpad stop working entirely once (a USB mouse continued working). I haven’t been able to reproduce this.

I noticed this too. It happened the first time directly when Unity had loaded (after logging in that is). I just hit SUPER and logged out that way, and it was back to normal without rebooting.

I noticed it happened a second time right now which may have been because my home disk got full (154KiB free because I’m switching to Thunderbird and it seems to want to make another copy of my IMAP tree…).

Try this it worked for me

I installed unbuntu 11.10 on my eee PC 901 and it worked well but the display resolution is wrong and not being detected. I read how to set it up https://wiki.ubuntu.com/X/Config/Resolution#Statically_set_up_in_xorg.conf but I’m not sure what setting I should use for refresh rate etc I know I want to set 800 x 480.
Any help with this would be great. TIA

My mistake! The resolution is correct just seeing dialogue windows not fitting onto the screen and unable to access the buttons confused me for a while!

I am out of space on the 4GB partition. What can I remove and how do I do that? I just installed 11.10 and allowed it to perform system updates.