If you’re dual booting Ubuntu with other Linux distributions or Windows, you may wish to change the which operating system starts by default. Ubuntu uses the GRUB boot loader to display a menu of installed operating systems and boot them. If you don’t see the menu before Ubuntu starts, hold down the shift key while your system starts up.

This guide is intended for Ubuntu 11.04 and 11.10, which both use GRUB version 1.99. If you’ve upgraded from an older Ubuntu installation, you may still have an older version of GRUB. Search in Ubuntu Software Center for grub-pc and check the version if you’re not sure.

There’s a graphical configuration tool for GRUB called StartUp-Manager. Unfortunately, judging by its reviews in Ubuntu Software Center the application has not been updated for the latest version of GRUB and has some problems. But if you’re comfortable with editing a configuration file and running some terminal commands it’s not difficult to change the default operating system manually. 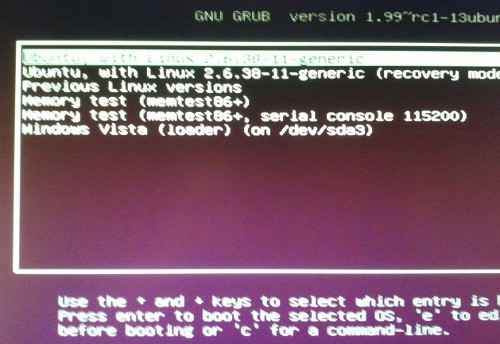 GRUB can be configured using the /etc/default/grub file. Before you make any changes to it, it may be a good idea to back it up by creating a copy:

You can restore the copying the backup over the original:

Open the file using the text editor with root privileges:

The line GRUB_DEFAULT=0 means that GRUB will select the first menu item to boot. Change this to GRUB_DEFAULT=saved . This change will make it easier to change the default item later.

Save and close the file. Run this command to apply your changes to GRUB’s configuration:

The configuration change we made allows the grub-set-default and grub-reboot commands to be used at any time. These allow you to change the default boot item permanently or only for the next boot, respectively.

Run grub-set-default or grub-reboot (with sudo) with the number of the menu item to boot (the first item is 0). This command will change the default to the second item:

In the screenshot above, Windows Vista is menu item 5. If you want to select an item from a submenu like Previous Linux Versions, you can specify the position in the main menu, followed by a greater-than sign (>), followed by the position in the submenu. You can also name an entry instead of giving its position. There’s a great Ubuntu Forums post about how this works. The Ubuntu Wiki also has more details on configuring GRUB.

Startup Manager works fine with Grub2. I’ve used it for a few years now, and no editing of configurations files is necessary at all.

I’m running Ubuntu 11.10 and startup manager didn’t work for me: GRUB_DEFAULT was set to 6 but I have only 6 choices in the list (so the last index is 5). Editing the file as described here worked fine!

I don’t know what happened but maybe startup manager has trouble handling sub-menus (the 2 items in the previous linux versions sub-menu might explain the index’s shift).

I came across this program see below and altered the boot process with it.

I am running Natty Narwhal Ubuntu 11.04 with GRUB 1.99 and i have been searching for info on how to do this for 2 days, tried at least 10 other methods but this one worked perfect!!! Thanks Tom.

Is there anyway for the grub menu to not display using dual boot 11.04 and win7? Win7 is the default and I tried setting to zero and hitting escape on boot, but that caused many issues. I had to reinstall 11.04 to resolve. I am trying to accomplish no info on the screen and hitting escape only when I want to choose Ubuntu. Thanks.

This topic is completely misnamed - It tells how to change the default boot item, IT DOES NOT tell how to CHANGE THE ORDER in which the options appear in the GRUB menu.

It was very useful to me.I was struggling with start-up manager. Thank you.

i have a Toshiba Laptop with Windows7 Pro, i installed Ubuntu 11.10 as well.
i followed the steps above… IT WORKED ..

Thanks for the clear and concise instructions. Exactly what I’ve been trying to do for the last couple of days.

Worked perfectly.. thank you soo much.

Thanks For the Help !

Any solution given is ok but it is not the simplest.
I think the most easy by far from the others is to open the /boot/grub/grub.cfg and change the line >>set default=“0”<>set default=“4”<>menuentry<>menuentry<< whitch lists you preferable os is the number you must put instead of 0.

This worked for me, and the startup-manager application worked on another computer. I appreciate the chance given by this tutorial to look “behind the GUI”. Thank you!

Clever work !
But what happends when an update to the ubuntu Linux kernel adds more items to the list ?

I think I have at least 12 different ubuntu items in my boot up list. And windows is the last 13th one, moving downwards.

- - -
A solution I have tried before that worked fine was to edit the file
boot/grub/grub.cfg

Cut, move and paste the sections in that file that belongs to different OS.
But in ubuntu 12.04 it has become more complicated because someone have messed everything up with IFs and stuff in that file, So where to cut in that stupid file now ?

OK here is an update a few hours later.
I tried to edit the boot/grub/grub.cfg in ubuntu 12.04
And moved the section for windows to the top, so it becomes the default.
And it works !

Open up a terminal window.

Write “sudo nautilus” and then press “ENTER” to open up the Nautilus file handler with permission to open anything with sudo priority.

Navigate to the file boot/grub/grub.cfg and doubleclick to open it up in a texteditor.

WARNING
Edit the file, but use your brain.
If you do it wrong, it won’t boot anymore.
But Windows boot can always be repaired with the tools on the windows installation disk FIXMBR and tools lika that.

Many thanks, works fine with Windows7:
sudo grub-set-default 5

Thank you! Used on Ubuntu Server 12, and it worked