When I need to produce any document more complicated than simple notes, I use the LaTeX typesetting system. It allows me to write markup in a text editor to produce nicely typeset documents with equations in PDF format, rather than fiddling with a WYSIWYG editor like LibreOffice. My typical environment for writing LaTeX is gedit, a PDF viewer, and a terminal to compile the document.

Gummi is a LaTeX editor that integrates all the pieces I need for writing into one application. The left pane is an editor with syntax highlighting and spell checking. The right pane renders the current state of the document or shows errors as you type. There are graphical shortcuts for operations involving simple text formatting, images, tables, matrices, and bibliographies. The New from Template function means I won’t have to hunt down an old document to use as a template for a new one. 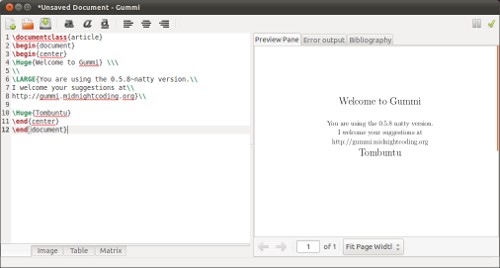 I was disappointed that the spell checker was not any smarter than the one in gedit about not marking LaTeX keywords as misspelled. It would also be nice if the preview could be scrolled continuously like a PDF in evince.

Ubuntu packages for Gummi are available from the Gummi PPA. Be aware that Gummi depends on LaTeX, which will be a several hundred megabyte download if you don’t have it already.

There’s no shortage of editors for LaTeX in the Ubuntu repositories. Another similar application is TeXworks, which has a better spell checker, but puts the preview in a separate window and seems to have broken syntax highlighting.

A few comments:
-For Ubuntu users, a package called “gummi-notex” can also be downloaded from the PPA. This version does not depend on texlive, aimed at that those users who want to set-up their tex distribution themselves.

-The features you are currently missing are worked on in the development branch right now. Continuous preview is about to be integrated, but also multi-tab support (for including other documents for instance), increased preview performance and support for advanced build systems like rubber and latexmk.

Here is a screenshot that captures some of the new features we have added: http://i.imgur.com/zntjZ.png

Thanks for the update! The multi-tab support looks great.

I have to say, another application called TexMaker (or the even powerful TexMakerX) is very nice, the two are both open source software, I have been using the two for more than two years.

For most stuff, I would just write it in markdown (http://daringfireball.net/projects/markdown/) then do one of these, depending on the output I want:

you’ll need to install, pandoc (which is pretty great) & textlive, I think. You can easily set these up as tools/macro’s or whatever in most text editors. I guess for more complex stuff you might need to actually author it in latex, but for 80% of things I write, this is more than adequate.