It’s 10/10/10 and Ubuntu 10.10 “Maverick Meerkat” has been released. This release includes the new photo-management software Shotwell (replacing F-Spot), a tweaked default theme with the new Ubuntu font, an improved Software Center, and the new Unity desktop environment for netbooks. Read Canonical’s press release for more, and start your downloads. 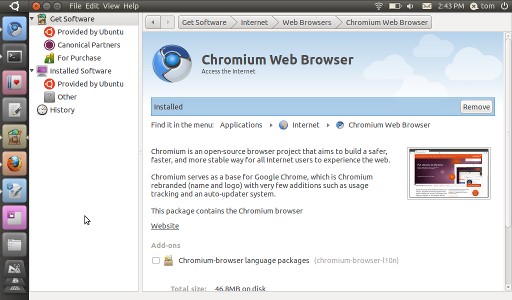 I installed 10.10 Beta on my netbook when it came out, but the Unity netbook interface turned out to be unusably buggy. Fortunately some updates mostly fixed the problems, and the final release works fine.

I installed the ISO onto a SD card using the standard Startup Disk Creator in Ubuntu. The Ubuntu installer has overhauled in 10.10. It now includes an option to install non-open source software for “MP3 playback, Flash content, wifi hardware, and similar functionality”, and options to install updates while installing, and it checks that you are plugged in, have enough disk space, and are connected to the Internet before starting.

The netbook edition now defaults to the new Unity desktop environment. If you don’t like it, you can still switch to the normal desktop from the login screen. Unity is based on GNOME 3 technology, including the Mutter compositing window manager.

When maximized, windows put their title bars and application menus in the new global menu bar, which also includes the system indicator applets. It’s a shame that the only old notification icon left is the network manager applet. It’s also disappointing that neither Firefox nor OpenOffice put their menus in the global menu bar properly.

On the left side of the screen is the Unity launcher. It shows a stack of application icons, one for every application that’s running or chosen to always appear for quick access. The icons stack up and scroll when there are too many, and everything is nicely animated. Clicking the icon of the focused application shows all its windows using a scale effect similar to Compiz’s.

The Unity dash can be access using the Ubuntu button in the top left of the screen, or using the “Files & Folders” and “Applications” icons in the launcher. The Ubuntu button gives you a full screen menu with big icons for a few tasks including “web”, “music”, and “get more apps”. “Files & Folders” gives you a simple file browser which isn’t too useful. “Applications” gives you a interface for searching and launching installed applications, as well as applications available in the Software Center. All the dash screens also include search. Searching seems to be a bit slow, and I wish I could select results using the keyboard.

Congratulations to everyone who has worked on Ubuntu for a great release!

I have mixed feelings about the Unity interface on the Netbook Remix. It’s pretty, but it CRAWLS on my eeePC 701 w/ 1 GB RAM. I hope Ubuntu will release a fix soon.

It is with a sad heart that I have backed up my files off of my laptop running Ubuntu 10.10, aka Maverick Meerkat, and reloaded from scratch with the previous version, 10.04, or 10.04.1 specifically. I have typically liked to keep up with the latest, greatest version of Ubuntu with the 6 month releases. In that vain, I upgraded my 10.04 system to 10.10 when it was released. I was not certain there were any new features that I really needed, and 10.04 was working flawlessly for me, but I just went ahead and dove in headfirst and upgraded. That was a mistake. I immediately noticed some glitches in the screen savers and then discovered that there had been radical changes in the Bluetooth management. I often use Bluetooth to tether my 3G phone and surf the web. Under 10.04, the default Bluetooth manager would not handle this type of arrangement in a convenient way. So, all one had to do is install the Gnome default Bluetooth manager, blueman. It paired with the phone effortlessly this way and then the network manager was used to create a DUN dialup connection for the particular cellular provider. It worked perfectly. Ubuntu 10.10 broke blueman. The default network manager was redesigned to basically combine the functionality of blueman and also streamline the creation of the DUN connection for Mobile Broadband. Looked nice, but unfortunately did not work well at all. It absolutely refused to easily pair to the phone without repeated pairing attempts and then when I finally got it to pair and created the Mobile Broadband connection and get on the web, it would not seem to hold its settings requiring a complete recreation of the connection settings every time I wanted to use it. I needed this to work for me out in the field today and it failed me, causing me much lost time and effort. This upgrade was a REGRESSION! Yes, the dreaded “R” word. I should have know that this release was not going to be a good thing when both I and a friend experienced strange behavior post upgrade to 10.10 on very different systems. Then within days, Ubuntu was pushing down over 400 megabytes of sudden critical updates. Seemed strange at the time, but now I know why – 10.10 was broken, still is in some ways as I have described. I learned a serious lesson this time. Never upgrade and good, stable LTS edition of Ubuntu for the latest greatest 6 month release without thoroughly testing the new release on a separate system. So, I post this blog from a nice freshly installed 10.04.1 build of Ubuntu. Goodbye Maverick Meerkat, it was not nice getting to know you. May you be eaten by a Jackal.
http://wa5pb.freeshell.org/motd/?p=528