Today was a big day for Ubuntu, with Canonical announcing the Unity desktop environment, Ubuntu Light, and more details about Ubuntu 10.10 “Maverick Meerkat”.

Unity is a new desktop environment designed for netbooks and touch-screen devices. It includes a new panel as well as a new vertical launcher. Unity is build using technologies from GNOME 3, including the Clutter library and the Mutter window manager.

Ubuntu Light is a version of Ubuntu designed to dual-boot with another operating system, and focused on getting on the web fast. It’s a stripped down Ubuntu (no file management) and uses the simpler Unity desktop. Canonical is offering Ubuntu Light to computer manufacturers only, because it’s intended to be customized for specific computers in order to boot fast.

Here’s a few other bits of information about the next version of Ubuntu:

You can get all the details by watching Mark Shuttleworth’s UDS keynote (thanks to Alan Pope for posting the video).

There’s an official PPA software source from Canonical with a test version of Unity. Here’s how to install it:

To start Unity, log out to return to the login screen. Select your user, select Ubuntu Unity Netbook Edition in the Sessions box, and log in. 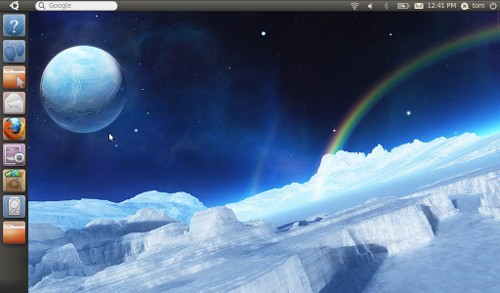 At first glance, it looks like you have the normal netbook edition GNOME panel at the top of the screen, but with a Google search box instead of a window list. There’s also a colourful stack of icons on the left hand edge of the screen.

Selecting an icon in the launcher causes it to glow while the application loads. Dragging up and down scrolls the list of applications, and dragging an icon out allows it to be repositioned. Right clicking on an icon initiates a scale effect which lets you select from all the windows for that application. There’s no support for minimizing windows.

Unity uses the Mutter window manager from GNOME 3. It’s a compositing window manager and supports some basic animations. At this time the integration between window title bars and the panel has not been implemented. The panel and launcher are run by Mutter, so it won’t be possible to use another window manager like Compiz with Unity. [update] A Compiz developer has Compiz working inside Unity, so this may not be true after all.

Clicking the Ubuntu logo scales all the windows and lets you select one to switch to it. The search box goes to Google for now, but later it should be used to search your computer. Everything else on the panel is an indicator, which the current exception of the network manager applet. Despite it’s appearance, the panel is not based on GNOME panel, but is drawn by Mutter.

I’m pretty excited about Unity. While the current version is not complete, it does seem to be in a usable state on my netbook so I’ll continue testing it there.

How does one add items to the taskbar? Seems difficult–no right-click option. Further, is there an autohide? The taskbar seems like a great idea IF it can be configured…

Nice! An alternative to Chrome OS? I think Google will have a brand advantage with computer manufacturers though.

this is a good!

Updated ubuntu to 11.04 with default unity. Now I am looking for new window manger. Never again gnome+unity. This thing is a disaster, nothing works correctly, and nothing can be changed. The stupid dock stays on the left side of screen no matter what. The even more stupid “gnome menu wanna-be” takes ages to click through to find what I need. No shortcuts to directories. Not to mention, that that thing doesn’t even START correctly - I need to manually start it again once I log in or else I get bunch of black rectangles instead of window content. Of course I can’t change ANYTHING except for the actual size of the panel in pixels. Oh, hiding of that ugly panel is “experimental feature”, at least seems to work.
Oh I forgot - that cursed panel on top eats window titlebar and menubar so if you have a bunch of applications open in small windows you have to… go all the way up to the top of the screen to get the damn file/edit/… menu.
I seriously wish the person that placed unity in official ubuntu (not the netbook remix) a slow and painful death. Hopefully along with his family - just to make sure their DNA goes out…

I’m also looking for a new window manager. Looked at xfce but they’re still using HAL for the device management. Looked at lxde but the battery meter doesn’t work. Might end up with KDE.
Gnome 3 is a bit better than unity, but not significantly.

I’d like to look at Unity but when I try to update my 10.10 or upgrade or load Unity as per this article, I am asked to insert CD Ubuntu Dapper Drake release and when I do, nothing happens? 10.10 keeps asking me if I want to upgrade, but blocks me. curious

I’m afraid but the Unity ins’t so intuitive for who works under the desktop skin.
It’s like a context menu, that change dependign where you are….
very bad.
I ’ll go back to gnome shell or KDE.
Regards

1) User interface fascism, like all other kinds of fascism, is bad. Any decent system should let individual users choose the kind of interface they wish to use. Highly configurable user interfaces are good.

2) One size does not fit all! Many people have invested significant effort in honing their skills using user interfaces chosen to suit their specific needs. Why should they throw that away just for something “new”.

3) The work “New”, as in “embrace new technology” is not automatically synonymous with words like “good”, “effective”, or “appropriate”.

4) Keep fashion out of operating systems. Fashion is always much more about following than about leading. Don’t follow anyone. Have your own ideas. Which brings us back to point number 1.

> 4) Keep fashion out of operating systems. Fashion is
> always much more about following than about leading.
> Don’t follow anyone. Have your own ideas. Which brings
> us back to point number 1.

Well said. I’ve been a system admin for 20 years. This whole Unity fiasco is sickening. windows has a stranglehold on the market. OSX is better than windows, but Apple prices are obscene. So a nice option was Linux, and Ubuntu was a solid 3rd choice for many years. People asked me zillions of times what computer to buy. If they were wealthy I recommended a Mac. If they were cheap I told them to just get any PC and put Ubuntu on it.

Now, to put it bluntly, any company that is going to make such a disruptive change is not a company I can put my trust and faith in anymore.

Now what do we do? … go back to Windows? … build a Hackintosh? … get a second mortgage and buy a Mac? … I guess I’ll sift through the reviews and try out one of the other 45,000 Linuxes out there.

Windows is just boiled crap.
OSX is pretty good, but you have to use their expensive hardware.
Ubuntu was good, but betrayed me.
Linux in general is just a monstrous unknown of 45,000 options.

Chaulcasian, give PC-BSD a try. Solid as rock and works wery well. I’ve used it for years in the mixed OS environment.