The Chromium Daily Builds PPA has been keeping me up to date with the latest version of Chromium, the open source browser behind Google Chrome. Google recently released the first official Google Chrome for Linux beta. When I did a fresh install of Ubuntu 9.10, I switched from Chromium to the Chrome beta.

I’ve been installing the daily builds of Chromium since before the tab bar even worked. A few months ago I left Firefox for Chromium. Since then I’ve occasionally had bugs with the daily builds, so I’m happy to be using the beta now. The beta has been stable for me so far, and is very complete. Firefox feels sluggish in comparison now. 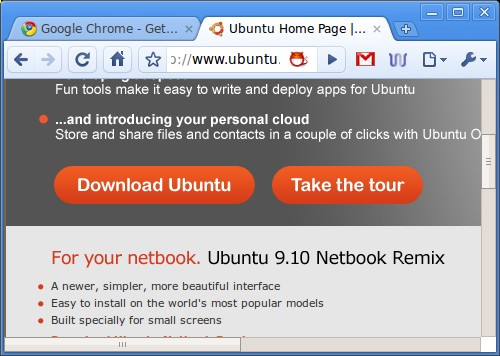 Google makes installing Chrome for Linux very easy. They provide a deb package which will install Chrome as well as add a software source so you can receive updates.

Head to google.com/chrome and click the “Get Google Chrome (BETA)” button. Select the 32 or 64 bit deb package appropriate for your system, read the terms of service, and click “Accept and Install”. Open and install the package. Chrome will be added to your application menu under “Internet”.

The nifty bookmark synchronization feature, which instantly updates your bookmarks between different computers over XMPP, is missing from this beta. However, I don’t think this feature is even in the stable Windows version of Chrome yet.

Extensions are working great, and Google also just opened its extensions gallery. Chrome extensions don’t seem to have as much power as Firefox extensions, but they do have the advantages of installing without restarting the browser and updating seamlessly in the background. Here’s what I’m using right now:

update: Here’s two more extensions. Chris in the comments points out One Number, which combines checking Gmail, Google Reader, Google Voice, and Google Wave into one extension. I also found Autocomplete = on to enable Chrome’s password saving even on sites that try and turn it off.

One annoyance I’ve had with Chrome is that there’s no option to open downloaded files instead of saving them. This means my downloads folder slowly fills up with old files I don’t need. For now, I’m working around this by setting the default download directory to ‘/tmp’. If I want to save a download, I can right click on the link and select “Save Link As”.

Have you tried Google Chrome? Is it ready to become your default browser?

Yup, when extensions came out I made the splash and switched from Firefox to Chrome as my default. What I love most is the mind numbing speed, and how well Chrome maximizes screen real estate.

I almost prefer the slightly weakened Chrome extensions, since a lot their Firefox counterparts clutter up the browser and integrate inconsistently. I like having them all in one place, in a way that doesn’t intrude too much.

I would prefer a way to choose which extensions get a button on the address bar though. Xmarks, for instance, doesn’t need one, yet there it is taking up space.

If you’re a Google freak like me, I’d recommend the “One Number” extension. Kind of a weird name, but it checks and displays updates for Gmail, Gcalendar, Gvoice, and only uses one button on the panel.

Yes, definitely. I’ve been following the same path like you. :-)

I’ve been using the Chrome beta for a few days now and I’m a convert! I tried the Windows version in my virtualbox, but the main reason I have the virtualbox in the first place is to run IE when needed :)

Anyhow, Chrome has been working flawlessly and I have made it my default browser … Didn’t think I’d have such an easy time dropping Firefox, but with the speed and the addition of extensions (can’t live without folders4gmail!) it was a no-brainer. Very impressed … Keep it up, Google!

If you click on the arrow next to a downloading/ed file in the bottom of the Chrome window, you can check the box next to “always open files of this type”. Then they are always opened when downloaded.

I have been using Chrome as well as Firefox. I am not using chrome as the default. But now that you have pointed me to AdThwart I will use chrome more. The chrome SEO extension looks like it may become useful when it is finished.

I use Chrome more and more as it’s so much faster, especially if I just want to check my Gmail account. However, it has problems with BBC news; often it loads the page, goes blank. Sometimes refreshing the page sorts it out, but not always. I’ve reported it, but until it gets sorted, I’ll stick with FF for most of my browsing.

I’ve been thinking about switching to chrome/chromium as well. I also like the daily builds a lot and use them regularly but I keep missing certain firefox extensions I really need.
For example a descent html validator extension is missing, as validity (or vality, I don’t remember the name very well) doesn’t have all the features I need.

As soon as chromium has all extensions I love in firefox, I will certainly switch.

Switched to it for a while now too. I’m happy.

Though I think google’s mail checker was the one that was leaking a ton of memory - leaving it overnight made chrome eat 3gb, later in the day using the processes tab (something not present in FF) I found out this extension was the culpit.

I’m always interested in Google’s latest ventures, so I was quick to install and try out Chrome. I was expecting that I’d only play with it a little, but within a week or two I found myself loading up Chrome more than Firefox, and it wasn’t long before Firefox was getting no use whatsoever. Chrome is by far the fastest browser I’ve ever used. It really astounds me.

And btw, the Windows version of Chrome *does* have bookmark sync enabled. That is the one feature I really miss having switched to Chrome Beta for Linux.

Yes, this has become my default browser, does not make my linux mint slow like firefox. :) fast also, better flashplayer performance in google chrome. Still bugs but no problem I hope they will be solved.

No!!! I am not using Chrome as my default browser. Until it has a noscript plugin and a REAL AdBlocker that executes BEFORE the sites download, I will never use Chrome as my default browser! If you want these things I have mentioned and the speed of Chrome add the firefox daily ppa and install the pre-release builds. I have been using it for almost a year and compared it to the latest Chrome and Chromium and firefox actually loads pages FASTER than both because it DOES NOT filter the content and scripts AFTER downloading the page, but BEFORE it even downloads!

The bookmark sync is also available in Linux builds (not sure about google beta builds but in daily PPA for sure). You have to use “–enable-sync” flag to enable it.

Thanks! I’ve been waiting for Chrome to be available on Ubuntu, and didn’t realize it was until opening your site this evening. I now have it installed, set as default, and bookmarks imported. Now….to the extensions…

I have been using Google Chrome for several days now. The speed is excellent, but without similar extensions like NoScript, YesScript, ReminderFox, Screengrab, FEBE, (the real) Adblock Plus, and DownThemAll, it is still a very far and long way from dethroning Firefox as my default browser. But anyway, in my Ubuntu box I am using Firefox, Opera, and Google Chrome together. Anything but IE :-)

I think I’ll stick with FF until they sort out an adblock plus and no script addon.

I haven’t yet found a Screen Grab for Google Chrome for Linux that offers a selected region of the page to be stored in my files (after I browse for the right one, name it, and select HOW I’d like it stored …JPEG, tif, gif, Etc.). I prefer not to load them to a web-based editor. Any suggestions?