Today I finally installed Ubuntu 9.10. I’ve only been on the upgraded system for a few hours, but everything seems to be working smoothly.

I used my usual technique for installing the new version of Ubuntu. I’m using separate home and root partitions. Using the custom partitioning option in the Ubuntu installer, I reformatted the small root partition using the new ext4 filesystem, and used my old home partition as the new home partition. The installer finished in just under nine minutes. Before leaving the live CD, I opened a root file browser (Alt-F2 and ‘gksu nautilus’) to remove my old configuration files (files and folders starting with a period in my home folder). Except for a few applications I don’t want to have to reconfigure, I moved the old configuration files into a backup location. This allows me to start fresh with applications and application configuration, without having to backup and restore my data.

Ubuntu 9.10 has been out for a while now, so I’m sure everyone knows what’s new. I’ll just mention some things I came across setting up my new system. 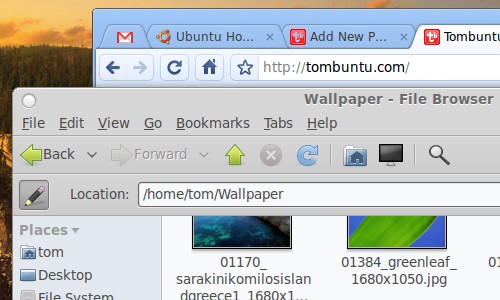 The default theme (and especially the icons) are much improved in Ubuntu 9.10. But I’m not a fan of orange so I installed the elementary theme (just the GTK and icon themes). I’m getting a warning that I don’t have the right theme engine installed, but I like how it looks so I just ignored it.

The first thing I noticed after installing the Nvidia drivers and getting Compiz running was how moving windows around looked jerky. I reapplied my settings from “Make Compiz Run Smoothly and Without Tearing” to fix Compiz’s refresh frequency and now it’s back to being smooth.

I’m using Chrome for web browsing now. Before the upgrade I was using the daily builds of Chromium. I used Google’s bookmark sync to save my bookmarks, but couldn’t restore them because the official release of Chrome lacks the sync feature. I couldn’t find a way to get at the bookmarks online (why isn’t this integrated with Google Bookmarks?)(update: A commenter points out that bookmarks are available in Google Docs), so I copied .config/chromium/Default/Bookmarks from my backed up configuration folder to the new Chrome configuration at ~/.config/google-chrome/Default/Bookmarks.

I installed Ubuntu Restricted Extras as usual to install Flash, Java, web fonts, and media codecs. For some reason this didn’t install the Java plugin. I installed ‘sun-java6-plugin’ separately to fix this.

After installing the latest version of GNOME Do I was pleased to find that it can now open my home folder. [update: After a reboot this no longer works.] This bug (I think it was actually in Nautilus) has been annoying me for ages.

I added the new Wine PPA to get the latest versions of Wine. Trying to install the ‘wine’ package failed with a “unresolvable dependencies” error. Installing ‘wine1.2’ instead worked (all ‘wine’ should do is install ‘wine1.2’ anyways). There’s a forum thread about this issue.

Ubuntu 9.10 has a little mail icon near the notification area called Indicator Applet. I’m using web-based mail and instant messaging, so the Evolution and Empathy integration aren’t useful for me. I am using a utility called Gmail Notifier which integrates with Indicator Applet and Ubuntu’s notification system. When I get a new email it pops up one of Ubuntu’s fancy notifications and lights up the mail icon.

The Sun version of Java could have not been installed by ubuntu-restricted-extras because there are currently plans to slowly phase it out, in favour of OpenJDK, the open source version of Java, which is usably since Sun released Java fully open source.

By the way the bookmarks are stored in Google Docs.

Thanks! You are correct.

Concerning WINE, I found it easiest to install via the new Ubuntu Software Center. It has both the stable and beta packages. No need for a PPA anymore!

9.10 was a disaster for me. I’s spent about a month switching from the ms os to Ubuntu 9.04 and thought 9.10 would just be a minor upgrade. It was so bad I switched back to 9.04 on the laptop after about 2 days and 9.10 never hit the desktop. I’ll be sticking with 9.04 until something gets out that LESS buggy and where:

1) my laptop doesn’t suspend itself randomly while I’m working with it.
2) doesn’t require a reboot to get the network working again after coming out of it’s (unplanned) suspend state.
3) actually DOES mount an NTFS partition when I click on it in Nautilus in instead of only promting for a password.
4) allows me to work on the laptop from my desktop screen/keyboard/mouse via xdmcp

The new partitioning tool failed so miserably in a VM that I didn’t even dare try it on real hardware.

The above are only the problems I had with 9.10 that I actually documented, there were more issues. I completely fail to understand how 9.10 actually got past internal testing by Canonical into a beta and then into a final release. It’s outright crap.

Agreed that it’s crap. From the piss-poor default handling of NTFS partitions/drives to wireless not working on hardware that worked fine with 9.04 to the inability to lock out the user with CTRL-ALT-L without having to configure the OS to do so. If the goal was to make Ubuntu more Mac-like in usability, they’re going the wrong direction.

I like fresh installs, too. Isn’t there an easier way to deal with dot files and /etc configurations? I’d like to be able to back up my old ones, get new ones, then do some kind of merge on them. Since this is a recurring event whenever we want to upgrade, aren’t there tools available for us?

Bookmark sync uses Google Docs to backup your bookmarks. So you can access them online by just opening up Google Docs.

Are you sure gnome-do works right for you? I still can’t use it to open the home folder on a few different computers. Instead I just type my username to open the ~/ folder.

Never mind. After rebooting once this is broken again :(

Tom you forgot to remove Mono and it’s dependencies.
And even install monono for keeping mono from creeping up on your hard drive and infest it.
Note: this will also remove Tomboy, Gnome Do.
You can find replacements for Gnome Do.

Although it feels like pointing out that the emperor’s new clothes are imaginary to folk who don’t want to tell the emperor, as per fortress Redmond limitations, I’ve reverted to GRUB, installed msttfcorefonts the old-fashioned way and used APTonCD to obtain Brasero 2.26.1 as a replacement for the still broken Brasero 2.28.2 to make Karmic more useable.
Having made the same changes to LinuxMint-8, which is much better for Home desktop use, I have also been able to use its Update Manager ‘ignore’ to block changes to Brasero etc files.
With Ubuntu’s wooing of corporate users, I hope that I don’t have to switch to another distribution family.