Midori is a lightweight GTK web browser which uses the popular WebKit rendering engine. I installed it on my Eee PC netbook to see if it could replace Firefox for light browsing. 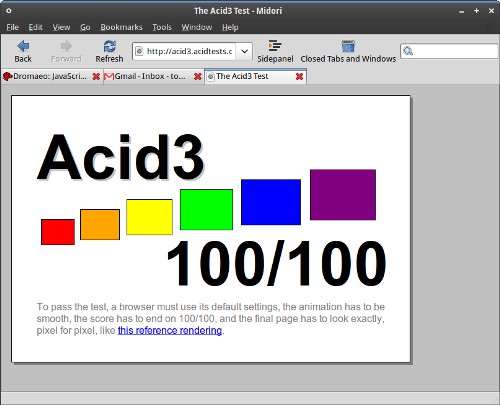 Midori seems to be stable. I haven’t had it crash yet, which is a large improvement over last time I tried it out.

Because Midori uses a similar WebKit rendering engine to Apple Safari and Google Chrome, it has few problems with website compatibility. I tried a few web applications, and all of them worked fine with the exception of Google Talk in Gmail, which seems to have a layout issue with Midori.

One feature missing from Midori is customization of the toolbar. If you’re working on a netbook with a small screen, you may want the toolbar to be smaller. However, you can do this by telling GNOME that you only want icons in toolbars and no text. Open System->Preferences->Appearance->Interface, and select Icons only in the Toolbar button labels drop down box. Note that this will effect all GTK applications. Update: Andrew in the comments pointed out that Midori has this setting built in (Edit->Preferences->Interface->Toolbar Style).

Another missing feature that would be nice to have on netbooks is a fullscreen mode which, like Firefox, autohides the toolbar and tabs.

Midori is available from the WebKit Team PPA for Ubuntu 9.04, 8.10, and 8.04. Follow the directions on the PPA page to add the repository, and then install Midori from the package midori (click the link to install), or by running the command below in your terminal:

Midori isn’t as polished or have as many features as Firefox, but it is very fast and standards-compliant. I wouldn’t use Midori as my main desktop browser yet, but it is definitely very well suited for use on a netbook.

It always segfaults for me after several minutes of browsing =/. If it didnt crash and had adblock, it would be my main browser.

Recently a changed from Firefox to Swiftfox, that one are stunning fast, i recommend a try.

By the way, please, could you say what are the GTK/Metacity theme you’re using? The one from the screenshot. Looks amazing, slick and elegant.

Oh! I just found the theme on GNOME Look Org, it is called Shiki-Colors right?

It is unpolished (I find myself doing ctrl+click to auto enter http:// and .com all the time in it) but its come a long way since when I first tried it and had it crash on quite a few sites.

Another cool thing i love about midori is the rendering speed which beats anything that FF3 has to offer.. it really remains me of what FF was…before it decided to take over the world with every feature under the sun.

I tried it multiple times, always crashed after a few minutes, usually Flash-related.

Sorry Tom, I don’t know what version of Midori you are using, but the one I am using (Midori 0.1.4 in abotu dialog) has fullscreen, has customization of toolbar.

Thanks Andrew! I didn’t notice those toolbar style settings before. However, when I mentioned customizing the toolbar I was thinking of moving buttons around as well as the style settings.

I know that there’s a fullscreen mode, but it doesn’t autohide the toolbar and tab bar like Firefox does.

Does it support Flash yet?

It is very fast but it crash on me after 2 minutes, on devaint art website!

Midori is very nice but like you said it’s not to be used as a main browser yet. I crashes too much. But I do look forward to it.

I’ve been using Midori on my Arch Linux installation (v0.1.3-1), which has been very stable. The only issue I have with it is the lack of a plugin architecture. Those mozilla folk sure knew how to lock us in to their browser when they designed that!

I would totally switch to Midori–I’m sick of Mozilla–if only it allowed the same plugins I’ve grown so accustomed to.

Hi Tom, nice to see you again :) Where have you been ?
I’m looking forward always your article.
Anyway I’ve installed the midori, as you said that Midori never crash in your system. But in my system it always crashed :(
For instance: when you open www.manutd.com and choose one of the news it will be crash. What happened ?

Nice to see you back on form writing prolifically again…

What happened did she dump you? lol

It’s page loading speed it slower (devs said “dns lookup is slower”), and not that polished for my use.

So I use epiphany for lightweight browsing. Much more feature-complete.

It crash all the time after minutes of browsing, sometimes with flash site, some times with extreme javascript sites (web 2.0)… but plain HTML just lovely :D

Lightning fast, but not very stable and lack of a tools for importing bookmarks from Firefox (I don’t like the idea of uploading my bookmarks to Google via the plugins in FF). If these two problems are addressed, I’d like to use it as my main browser.

pardon my french but your article is mostly a lie, all the things you claim to be missing aren’t, some are even better than firefox’s (ie, you can hide the tool/menu/status/tabbar even in normal windows, not just fullscreen), it is indeed a bit crashy as some comments have mentioned before but that’s mostly due to the plugins but overall far better than you make it sound (that or you’re using a terribly old version)

with that said i wish there was better doc covering the extensions mechanism since i’d like to port a few things i miss (emacs keybindings, keyboard link navigation a la conkeror/LoL, noscript/extended adblock)

Have you tried Arora? Similar to midori but on the qt side. Though I’m a gnome-head, I use it as my primary browser. Nice, small, very functional.

In intrepid and jaunty although jaunty has a newer engine with qt4.5.

For those complaining of Midori crashing or not crashing, it really depends on what version of webkit that you’re using. If you’re less up-to-date, you might be using an older version that makes Midori crash more.

I’m trying to install Midori on my EeePC with Xandros and I’m not having any luck.

I like midori a lot. The only thing preventing me from using it as my primary browser and finally ditching Firefox is usable extension for keyboard navigation.