Today Mozilla released the third beta for the next major Firefox update, version 3.1. Firefox 3.1, which will likely be re-numbered to Firefox 3.5, will have one more beta before the final release this summer.

The most significant upgrade coming in Firefox 3.1 is the new Javascript engine, TraceMonkey, which is enabled by default in Beta 3. I tested its performance with the SunSpider Javascript benchmark. Firefox 3.1 performed 1.6 times faster than Firefox 3:

The new private browsing mode is available from Tools->Start Private Browsing. When you enter this mode all of your tabs are saved and closed, and no history is recorded until you leave the private mode. After leaving private browsing mode Firefox returns to the state it was in before. There isn’t any visual indication when private browsing is active, which could be a good thing, but it could also make it easy to forgot that it’s turned on.

Another new privacy feature is Clear Recent History. From this dialog you can choose a time interval, and what exactly you want to be cleared. 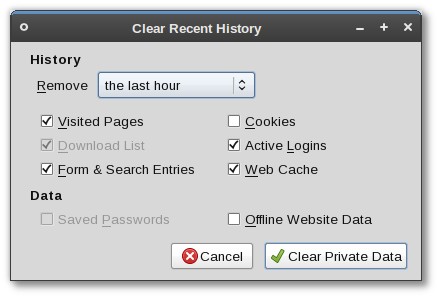 Tabs can now be dragged and dropped between Firefox windows. You can drag a tab from the tab bar in one window to another tab bar to move it. Dragging a tab out of the tab bar and onto a page opens a new window for that tab.

The new HTML media elements allow video and audio to be played in Firefox without additional plugins. Simple playback works great for me, but seeking to a position in a video takes a long time or doesn’t work at all. TinyVid is an experimental streaming video site where you can try out this feature. 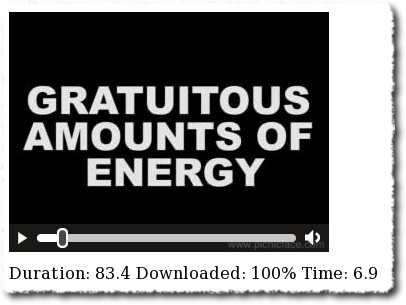 You can test drive Firefox 3.1 Beta 3 without disturbing your existing stable version of Firefox.

This Firefox package is unbranded, it’s referred to by the codename for 3.1, Shiretoko.

Could you please run the whole of the Dromaeo benchmark suite?

Hi, what graphical theme are You using? It looks really nice. Can You share the link to this theme? Thanks in advance.

should users of 9.04 also backup there firefox profiles before trying? i did just to be safe, but i wasn’t sure if it was needed

If you’re installing the firefox-3.1 package you don’t need to backup because both versions of Firefox will be set up to use separate profiles.

Using the Mozilla version of Firefox 3.1 Beta 3 does play video/flash on youtube for example without sound. Any idea why?

Well, I figured out where the problem is. It turns out u get the performance boost by switching to firefox 3.1 only if you’re running 32-bit version.

Thanks - great tutorial as usual. I have been using the Firefox Minefield 3.2a1pre from here http://ftp.mozilla.org/pub/mozilla.org/firefox/nightly/latest-mozilla-central/. I am not sure the difference between 3.1 and 3.2 but on my Acer Aspire One running 8.10, Firefox Minefield 3.2 is fast, stable and you can get some add ons to work. Check out this thread in the Ubuntu forums for more info http://ubuntuforums.org/showthread.php?t=1058656&highlight=firefox+3.2.

thanks again for all the great tutorials

what is the name of this theme that is shown above?