A few months ago I wrote about a feature-rich open source application for monitoring your Gmail inbox - CheckGmail.

I know a few of you, like me, have been continuing to use it since. Unfortunately, a few days ago CheckGmail stopped working with a Error: Incorrect username or password dialog. I’ve found a solution for this. Skip down this post if you’ve already installed CheckGmail.

Install CheckGmail from the package checkgmail (click the link to install), or by running the command below in your terminal:

CheckGmail has an optional dependency that adds password encryption. Install the package libcrypt-simple-perl (click the link to install) or by running the command below in your terminal:

Start CheckGmail for the first time from Applications->Internet->CheckGmail. You can get started by entering your Gmail credentials and clicking OK. Note that unless you installed the optional dependency, using the password saving option will store your Gmail password on your disk in plain text. The CheckGmail icon will appear in your notification area. 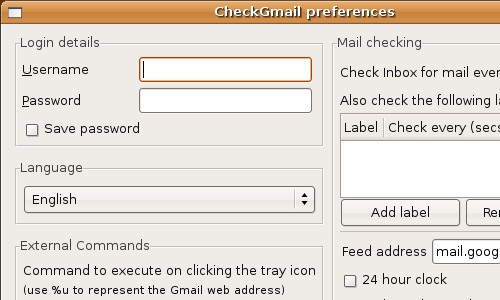 You can start CheckGmail automatically when you log in. Open System->Preferences->Sessions and click Add. In the Add Startup Program dialog, set the name value to CheckGmail and the command to checkgmail.

Run CheckGmail normally and it should log in successfully.

Damn, this is exactly what Ive needed :) Thank You!

awesome! thanks. that was driving me crazy.

I don’t know much about computers but I followed your procedure step-by-step and it solved the problem. Thank you for taking the time to post this solution. People like me rely on people like you to keep our computing lives on track

Tom you are amazing. I was having the same problem and I was so pissed by it. Thanx!!! You rock. Are you Indian?

Thx a lot! It works now

Thanks a lot for this detailed and so articulate post!
Really glad to have found it among the piles of confusing Ubuntu-beginner-unfriendly forum tips:)

It was an instant help!

Why should I use checkgmail????

Everything works again. Thanks.

It appears that svn access alltogether is broken (7/30/08). Anyone have a mirror?

Hi, I am using cgmail, which is more flexible as it supports GMail, but also POP3 and IMAP Mailboxes.

Many thanks for sharing this–certainly fixed my problems with CheckGmail!

Thanks for this post. Using the -no_cookies solved the problem for me. Here is what I don’t understand: CheckGMail was working fine until about one week ago. Then the problem you describe here happened. However, your post is dated from July 2008, and back then until now, it was working fine for me. What made it suddenly stop working for me, more than a year after you?

Thanks, the no_cookies switch did the trick for me.

Slick! May i suggest that you incorporate this update in the official release. Or if you have, kick the ubuntu team in the donkey, for being slack in a nonzen way.