Canonical has announced the Ubuntu Netbook Remix, a version of Ubuntu designed for small computers with Intel’s new Atom processor. These include “netbooks” (small laptops such as the Asus Eee PC), and “MIDs” (small handheld computers).

Canonical has done some interesting things with the Remix. It’s based on the default Ubuntu 8.04 desktop; the largest new feature is the new application launcher. This launcher covers the desktop and provides access to applications and files from a small screen.

There’s a single GNOME panel at the top of the screen. It uses a modified window switcher to save space, and also acts as controls for maximized windows. See this page for more screenshots. 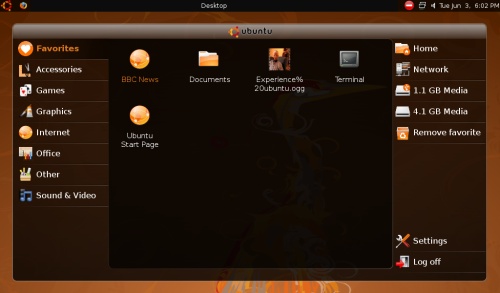 Ubuntu Netbook Remix will be available only to OEMs because Canonical has licensed proprietary media codecs and other software including Adobe Flash. I hope that there will be a freely available version to install on netbooks that don’t come with it preinstalled. The press release says that the first devices with the Remix will be out “later in 2008”.

So far there have been no netbooks announced to with the Ubuntu Netbook Remix, but I suspect that Dell will be offering it with their rumored mini-Inspiron.

[update] Instructions are available for installing the Remix without the licensed software on Ubuntu 8.04. Ars Technica has a closer look at the new interface.

You may try downloading one of these images http://cdimage.ubuntu.com/moblin/hardy/ and seeing if you can do something useful with them. :-)

Woah, woah, woah… what? Canonical is releasing a version that is available the “only to OEMs”? That doesn’t sound right. And the largest new feature is an application launcher? That doesn’t sound right– a new menu doesn’t constitute a new distro, must less a proprietary one. This seems very “fishy” to me, and against the whole idea of open source and Linux. Is there more to this story that we’re not hearing here?

The moment I saw the screenshot, I thought “Looks a bit like Affinity.” I should have known Neil J. Patel was behind this! :)

The interface in the other screenshots looks incredibly useful for smallscreen notebooks. Can’t wait for a public release!

that looks pretty cool, better than xandros at any rate.

any idea where you can download it to use on a normal ubuntu install?

Come to think of it I’d pay for a version of Ubuntu with the licensed codecs & flash preinstalled.

I mean, it’s not like we’re doing it legally living in North America anyway atm…

“Ubuntu Netbook Remix will be available only to OEMs because Canonical has licensed proprietary media codecs and other software including Abobe Flash.”

Umm what about all that other GPL’d stuff?

It would be virtually impossible not to put out some kind of free public version, both to satisfy the GPL and to live up to their pledge-motto “Ubuntu will always be free to download, free to use and free to distribute to others.” That said, codecs and video playback etc have long been a thorn in the side of all Linux versions. If you include them, you pretty much have to charge for them because they’re proprietary; if you don’t, newbies scream because they can’t play xyz without downloading some codec which is questionably legal in many places.

Looking forward to seeing one of those itty bitty notebook computers with Ubuntu Netbook Remix.