Wormux is an open source clone of the classic game Worms. It’s a multiplayer turn-based game in which teams of open source mascots battle on a deformable landscape with a variety of weapons.

Wormux 0.8 was recently released, bringing networked multiplayer, new maps & weapons, bugfixes, and more. Wormux has been one of my favorite open source games, and now it’s possible to play with friends not sitting at the same computer as me.

An older version, Wormux 0.8 beta 4, is included in the Ubuntu repositories. No package or download of the final version is available for Linux yet. However, I was able to compile Wormux 0.8 from source on Ubuntu 8.04. The process is fairly easy, you can follow using the commands below.

[update] Unofficial DEB packages for Ubuntu are now available, so there’s no need to compile anymore. 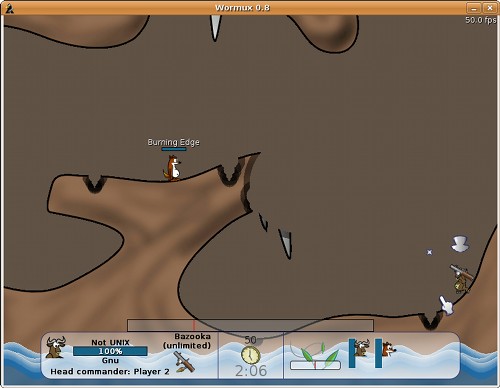 Install the extra dependencies needed to compile Wormux (many of these packages will have dependencies of their own which will be automatically installed):

Change to the Wormux source directory:

Run the configure script to prepare Wormux to be compiled:

This is where you will run in to a problem if you are missing a dependency. If configure is successful you should see this message: Execute make to compile then execute make install to install...

Run make to do the actual compilation:

Seeing a lot of output on the command line is normal in this stage. Compiling Wormux took about four minutes for me.

Install Wormux on your system:

If all that finished without errors, you should be able to start Wormux from the menu item at Applications->Games->Wormux.

To uninstall Wormux, switch to the source directory again and run make uninstall:

.. lol ..
And why you force users to compile game!? It would be simpler and faster for users if just make a .deb package for Ubuntu 8.04…

Can’t seem to play against the AI = poor game.

thanks for the .deb

64bit ones are available here: http://getdeb.net/app/Wormux

When I run the game it closes as soon as I start moving. Any idea why? Im running 64-bit of HH.

Ted, I have the same problem. As soon as I start moving, the game exits. Weird.

i want to install wormux in specific dir. how to do it?

Love it, Wormux is so a great game!