With the Fonty Python font manager, you can organize your fonts into groups (called “pogs”), and install and uninstall these groups when you need them. When a pog is not installed, you won’t have the fonts it contains filling up your menus. 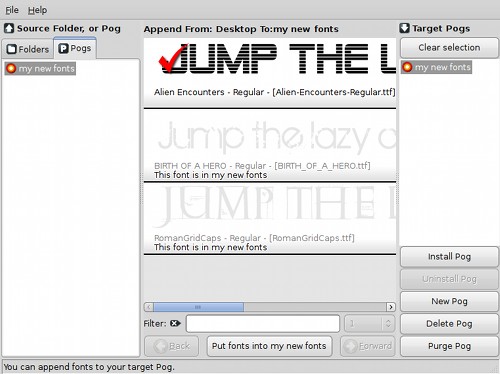 The latest version of Fonty Python is available in Ubuntu 8.04. Install it from the package fontypython (click the link to install), or by running the command below in your terminal:

First, you’ll need some font files to test out. There’s a list of sources on this page, and I also like dafont.com. Store your font files in any directory, but keep them in one place so Fonty Python can find them. Don’t install the fonts, the application will take care of that for you.

Start Fonty Python from Applications->Graphics->Fonty Python. I get an error message starting the program, but it seems to work fine.

On the rightmost pane of the window, you can select font sources. Under the Folders tab, select the folder you put your fonts in. The fonts found in the selected folder should be listed in the center.

On the leftmost pane, click New Pog, give your first pog a name, and select it. Click on fonts to select them, and click the Put fonts into [pog name] button to add them to the selected pog. Click Install Pog when you are finished, and the fonts should show up in applications after they are restarted. You’ll need to uninstall a pog to edit it.

Wondering how Fonty Python works? If you look in your ~/.fonts directory, which is used for loading fonts for the current user, you’ll see that links are put there pointing to your installed fonts.

Way to go! ubuntu really needs a Fonts Manager. It should be packaged into the system by default, i mean how many OS out there that doesn’t have a font manager, ubuntu alone?

Open nautilus and go to fonts:\\\

Or if you need a font manager defoma is installed…

So, Ubuntu does have a font manager or two…

Awesome. One of the only gripes I have had with Ubuntu over the years has been font management. Thanks for the tip.