PulseAudio is the new sound server that’s being included in Ubuntu 8.04 and other recent Linux distros. A sound server lets changes be made to sound between the applications and sound hardware layers. Among other features, PulseAudio provides per-application volume controls, a plugin architecture, low-latency, networking features, and good application compatibility.

PulseAudio can do a lot, but one great feature is the ability to adjust the volume of individual applications. This is great for applications such as Flash applets that usually don’t let you adjust volume.

Ubuntu 8.04 is not currently including a user interface for this feature, but it’s easy to install one. Install the package pavucontrol from your package manager or by using the command below:

Run pavucontrol in a terminal to start the PulseAudio Volume Control. (You’ll probably want to add an application menu item through System->Preferences->Main Menu.) 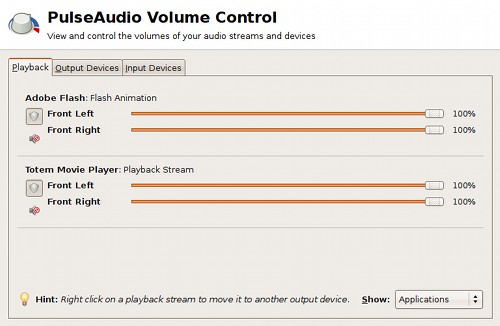 PulseAudio will remember your volume settings when you reopen applications, so don’t forget to change the volumes back to 100%.

A great option is also the ability to just move an audio stream from one pair of speakers to another :) If you have both built-inn laptop speakers and an external soundcard, which I do.

Pulseaudio is one of the greatest improvements I have seen to Ubuntu/Linux in the last years, and actually works fine with Gutsy as well (although a patch to Firefox is required).

The bad thing about hardy is that not all application are setup to use pulseaudio by default.

This is such a fantastic feature. It’s the greatest reason for why I’ve been looking forward to 8.04. I really, really, really hope it makes it into 8.04 by default! It should also be easy to open it via the Gnome Volume Applet, but I guess that’s too late for 8.04.

Remember that this was one of the things that Microsoft was using their “propaganda” for Vista, which probably means that it’s a feature that matters to normal computer users. Now we have the same possibility in Ubuntu, but instead of boasting of it like MS did, we hide it away so that normal users probably won’t even know it’s there, or if they do they won’t know how to get to it because they have to install a program with the very describing name “pavucontrol”… :|

So, yeah.. I’m not hating on anyone here (and I’m definitely not an MS fanboy!), I just think it’s quite sad if this is not included by default, that’s it. Because I really believe this could be yet another reason for “Joe User” to make the switch; another small step to fix Bug #1.

There’s an idea about this over on Ideastorm. Please vote for it if you feel the same way I do:
Add a GUI to PulseAudio

Hi,
I just translated your post into french on my blog, do not hesitate to contact me if you don’t want it published.

The only major problem I have with pulseaudio is that under pidgin the sounds only come on during an IM and in the GUI the volume control disappears directly after the sound is gone. This means you have to catch pidgin in the act of playing a sound in order to actually change it’s volume level which is rather annoying.

padevchooser is a gui for pulseaudio

So why not change a pidgin IM sound temporarily to a long several second sound file, adjust the audio, and then restore the original IM sound? If it’s long enough to catch it initially you’ll have time enough to set the volume amount, or do these volume values not survive a reboot?

it shows up under sound & video after installation so you do not need to create a launcher for it with alacarte:

hopefully 8.10 will get a nice UI, I think an icon that you mousetrap to view volume levels would be nice, much faster than the vista, way of doing it. scrolling and mouse over should be enough to set the volume for each application, not the horrible focus mess vista has

something for KDE too would be nice, something like kmix, but for pulse audio as those of us on 3.5.x

I have created a HowTo for streaming sound on the local LAN with PulseAudio. It uses pavucontrol to copy the sound of an application to a Multicast stream. In case somebody is interested:
http://x4.6times7.org/dokuwiki/doku.php/devlog/blog/streaming_on_ubuntu_8.04_with_pulseaudio