Adobe AIR (Adobe Integrated Runtime) is a runtime for building Internet-connected desktop applications with offine storage. It’s been available for Mac and Windows for a while, and now an alpha (non-feature complete) Linux version has been released. I tested it out in Ubuntu 8.04.

AIR requires a fairly recent Linux distribution, GNOME or KDE, and a RPM or Debian package management system. To get transparency effects, you need a compositing window manager such as Compiz or Metacity with compositing.

To install AIR you need to run Adobe’s installer. Download the installer:
http://labs.adobe.com/downloads/air_linux.html

Open a terminal and change to the directory where you downloaded AIR, in my case, the desktop:

Set the installer file as executable:

After the install, you’ll find the Adobe AIR Application Installer under the Applications->Other menu. This simply opens a GNOME file dialog for you to browse to a AIR application to install. AIR installer files (.air) are associated with the installer, so you can just double click them to install.

Adobe provides some sample applications, I installed the ScreenBoard sample (lets you annotate anywhere on the screen), which worked well. It’s launcher was added to a new Application menu category called AIR Examples. 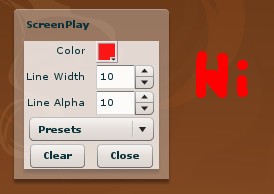 Two unoffical AIR applications, DiggTop and WebSnapshot, failed to install because the files were reported to be corrupt.

Next I attempted to install Pownce’s AIR application, just because I think it’s one of the best known. I don’t have an account, but from what I could test it’s working.

Adobe has come though after promising AIR for Linux for since the Windows and Mac versions were released. It’s not yet compatible with all AIR applications, and there aren’t that many to begin with. AIR is definitely alpha-quality, if you don’t need it for a specific application then you shouldn’t bother to install it yet.

Now, I have a question. The AIR installer requires root privileges to install to /opt. I ran it as my normal user, and was not prompted for my sudo password. The install still completed. Anyone else notice this or know what’s going on?

From the release notes:

I gave it a try on Hardy, and sure enough it popped up a password dialog.

Also neat is that apparently installs as a debian package, adobeair-enu. So uninstalling should be as simple as:
sudo aptitude remove adobeair-enu

It’ll be interesting to see if Adobe Air platform really takes off. It seems like this, Google Gears, and Mozilla Prism are all striving to break the barrier between desktop and web applications, each in their own way.

I haven’t gotten around to installing Flex Builder + AIR yet.

That is a very serious issue and you need to file a security bug if that is true.

Hm, I was prompted for my password so no idea. Just wanted to say that Adobe need to learn from FOSS…while it’s great they release AIR for Linux, would it hurt them to release it compiled for 64-bit machines? And that goes for the flashplayer too…

It crashed for me :(

I’m using Hardy, and it popped up prompts to install for me as well. I highly recommend “Twhirl” if you use Twitter. Just remember to turn off the “hide on minimize” or it will minimize and never ever come back. The textures were a little wonky the first time I ran it too, but now it has transparency and looks nice.

Nice to see that Adobe is finally showing Linux some respect. But when will they ever fix the crappy performance of the Flash plugin?

So far I have just managed to get Pownce running
http://anojrs.blogspot.com/2008/03/adobe-air-for-linux-works-great.html

Anyone had any luck installing other apps like Twhirl and Tweeter?

perhaps you had entered the sudo password a little while earlier. sudo remembers your root privileges for a while.

are you running on 64-bit? AIR is known to not work on 64-bit systems.

I am running on a 64-bit Ubuntu, and in order for my Flash to run successfully in my Firefox browser, I have to get the 32-bit version of both products.

Strangely, I’m able to run Air application smoothly from Flex Builder Alpha 3. It’s either I have missed some notes, or it’s a 32-bit runtime, or it just works.

Guys,
Anyone had problems installing their own Air apps?

I keep getting a message saying an error has occured, it needs administrator account to update.

Run it from command prompt with sudo, still fail.

Downloaded some apps of Adobe Labs and it work perfectly.

ps : was developed on Windows XP platform and it’s working there no problem.