Mozilla Prism is a web browser that allows web applications to be integrated with a traditional desktop and act like native applications. Launching a web app using Prism is done in the same way as launching an application installed on your computer, from the Applications menu. The Prism browser is simplified to not get in the way of the web app.

The integration between desktop and web applications has been taken to the next level in Ubuntu 8.04 Beta; you can now easily install Prism web apps from the Ubuntu repositories.

Nine familiar sites (mostly from Google) are available at the moment, you can apt-get install or use your package manager to install any of these:

Setting up a web app with Prism isn’t difficult, so many more convenient packages could be on the way. You can create Prism launchers for your own favorite sites using the official Firefox extension.

The Google Talk package (prism-google-talk) is terrific. I’ve been using the built-in chat in Gmail instead of a native client like Pidgin. The package uses another Gtalk web interface which is much better than the one in Gmail.

Using Prism, I can launch Google Talk from my Applications->Internet menu: 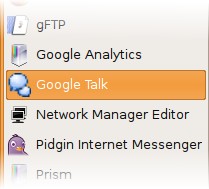 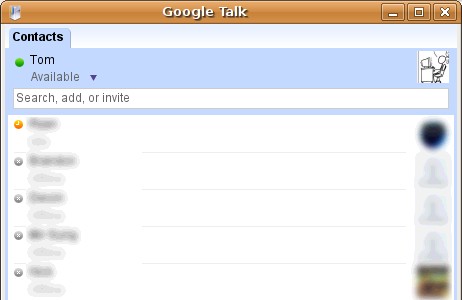 Perhaps Ubuntu should include some web applications installed by default. Anyone else think that offering Google Docs in the Applications->Office menu as well as OpenOffice is a good idea?

This isn’t the first time I’ve written about Prism. Thanks to Derek Buranen for pointing out these new packages.

To be honest, I would rather see that OpenOffice is not installed by default so I can use Google Docs (or Zoho or Zimbra) instead.

Prism is great … I love it

I’d prefer to replace Open Office with Google Docs myself. I never, ever use Open Office and yet I can’t completely remove it without breaking language packs for other applications either.

There goes my project (http://code.google.com/p/goopackage/). Ah well, I was getting bored anyway.

Thanks - I glossed over the Prism site a few weeks ago but didn’t give it a go. It’s an interesting project. What kind of resource usage do you see? About the same as Firefox?

Great site btw - been enjoying many of your posts over the past few months. I’m switching to Ubuntu sometime this week methinks.

It’s great for my school notebook. It’s an older T23, PIII, with 256MB of RAM. Having OpenOffice, Firefox (w/ Gmail, Reader), and a terminal open would just about drag the machine down. I’m not fully convinced enough to use Google Docs, but I’ll give it a shot.

It looks like Prism takes about 30MB or so of memory and then a handful for each open app. Maybe some little gripes here and there, but if you look at the Prism wiki, it looks like there are lots of features yet to come.

Mozilla Prism is an interesting spin on traditional webapps– I wonder if it will catch on. I haven’t tried it yet, so I still have a few questions. In particular,

-- How does it handle times when there is no network connection? Does it use some sort of caching, like Google Gears?
-- Is it easy for sites to create “Prism” versions of existing interfaces?
-- Are there blocks that exist to disallow navigating to a different page, or is this just a minimalist web-browser?

I think I’ll install a few examples to try it out later on.

sounds great - can’t wait to try this when I upgrade! I was actually introduced to Prism by a question I had in the AWN forums: https://answers.launchpad.net/awn/+question/25338

however, for the sake of competition, I think Ubuntu should include some competitors to Google apps in the repositories aswell, for instance a selection of Zoho apps http://zoho.com/ - I’m a heavy user of Zoho Planner myself.

other apps that would be appreciated are for instance Backpack: http://www.backpackit.com/

Oh yeah, Prism is great. I blogged about it awhile back, I use it for watching a webstream and Google Reader - now I might not have to set it up myself, that’s fantastic.

That resource usage is great. I’m ready to ditch Firefox for something else (Epiphany?) - the only thing I really dig about it is Firebug. I’ve turned off almost all other add-ons.

I think the Google Docs action is particularly cool. I would definitely use it more than OpenOffice with the ease of Prism. Now I just need to find the right time to ditch Winblows…

I’ve tried Prism Google Mail, but ads are appearing. Is there a CustomizeGoogle equivalent for Prism? I can’t use it with ads.

is there anyway to add support for right to left languages to mozilla prism? specially I need it for prism-google-talk. is it possible?

I have been using prism since last fall. I am really hooked on it. I love it for the google apps as well as others like pandora and my installation of Tracks (http://www.rousette.org.uk/). I am also excited about version 0.9 and its intergration with firefox3. I have been having trouble with 0.9 since it call out. I works okay on Windoze, but the ubuntu has some bugs (at least in my install). I noticed that the packaged webapps for Gdocs, Gmail, etc, are 0.8 with and svn customization attached. Any word on when the prism in the repo will be going 0.9? The big bug I have is with the FF extension. I click the menu to create a webapp from the current site and it installs it to the desktop. When I click on it, I just opens FF at my home page… I still create webapps with the 0.8 engine installed from the repo at least…

concerning the FF-extension-bug: the problem here is, that ubufox doesn’t accept the –app parameter, which prism uses. the original xulrunner does. So to fix the problem, simply open the webapp’s preferences (“eigenschaften” in german) and change the /usr/lib/firefox-3.0.3/firefox at the beginning to /usr/bin/xulrunner and it should work the next time, you start it. (make sure you don’t touch anything behind the –app flag)

I have two issues with Ubuntu - Prism:

Compared to the Windows version (which is technically the official from Mozilla):
a) Prism can remember username and password.
b) Prism uses different cookies for each Prism-Applications.

And I do not know who’s handling Ubuntu - Prism so I can report those :p

Other than that, great job.

If you create your own Prism app (as opposed to using one of the pre-built Google apps in the repository), is there a way to have the Prism app appear in the Ubuntu’s Applications menu?

1. Open the app link on the desktop in an editor, like gedit or kate.
2. Open your menu editor, gnome or kde.
3. Copy the pertinent information from the app link to the menu editor, the name, the run command, and icon.
4. Save your new menu and test it.