Ubuntu 8.04 “Hardy Heron” Beta has been released, you can get it by downloading a ISO disk image, or by upgrading Ubuntu 7.10 or any of the alpha releases. In this post I’ll just be writing about my experiences with the beta since installing it.

Once the beta was out, I was ready to install it on my computer as my main OS (the alphas were pretty stable, but there have been some major bugs). I wanted wipe out all the bits of software I’ve installed that have been building up since I installed Ubuntu 7.10. So I opted for a clean install. If you don’t have a separate home partition now, think about setting your system up with one. It makes doing a clean install painless.

The live-CD detected my widescreen monitor’s resolution correctly with the 2D “nv” driver. The install went fine, although I noticed that the timezone selector map has been changed so it’s difficult to select or see the cities. The install also went quickly, only taking seven minutes to copy files and configure the new system while I browsed in Firefox.

The installed system boots from the boot menu to the login screen in 30 seconds on my recent desktop PC. Once I logged in, my desktop looked exactly the same as in the old installation because I had kept the same user from my home directory. I moved all the hidden dot configuration files into another folder so I could use the new default desktop.

I have a Nvidia Geforce 8600GT-DDR3 graphics card. With Ubuntu 7.10, I had to manually install the driver because the one in the repositories was out of date. With this beta, after my first login I was asked if I wanted to enable the proprietary Nvidia driver. After it installed and I rebooted, Compiz started up and worked flawlessly.

The default theme is Human-Murrine, which hasn’t grown on me. I do like the heron wallpaper and matching login screen, as well as the subtle orange shadow behind windows. There’s also a cool zooming effect when using application launchers with the GNOME panel. 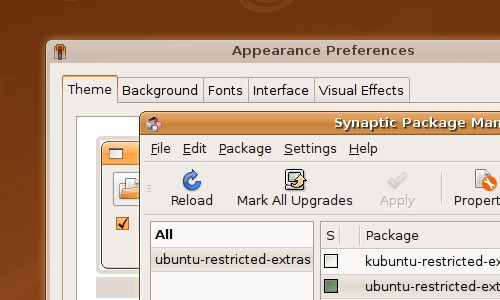 There’s a new clock applet (intlclock) that can display a map with the time in multiple locations and the weather. When I set it up with my location, the clock put the map marker in the center at the coordinates 0 , 0. If you don’t enter coordinates for a location (it’s marked as optional in the dialog) the map marker will be displayed in the center of the map. It would be nice if it could guess a location’s coordinates using a web service or just from the timezone.

I used the package ubuntu-restricted-extras to install audio/video codecs, DVD playback, Java, Flash, and fonts. I am enjoying the latest version of Flash which has GTK and fullscreen support. However, the Java plugin that gets installed doesn’t work in Firefox 3.

I ran into two more minor bugs. By default, mousing over an audio file will begin to play a preview of it. The problem is, I deleted a file while this preview was going, and it wouldn’t stop. The AptURL handler, which lets you install packages via links in Firefox, seems to be broken in Firefox 3.

Ubuntu 8.04, even the beta, is an exceptional release. I got my system nearly perfectly set up without any command line work or significant issues. If you’ve been considering installing and testing the Ubuntu 8.04 Beta, go ahead and it will likely work just fine.

Correct me if I’m wrong, but isn’t there an option on install to copy over the home directory?

Any idea how ATI/Compiz/AIGLX is working on this release? it took a long time to finally get it working and I’m wary of doing anything that would break it.

Good point about setting up the separate home partition. Maybe this would be a good opportunity to offer a short guide on how to do that, both for those setting up a new install, and for those modifying an old one.

Thanks for the insights on the beta. I for one am excited.

What’s your suggestion for the most painless way to upgrade? I’ve installed a lot of fonts/codecs/applications that don’t come with the clean install so what’s the best way to re-install them? I guess APTonCD won’t work because it’s a different repository for Hardy?

Any advice would be appreciated!

“It would be nice if it could guess a location’s coordinates using a web service or just from the timezone.”

Do not enter any info in the “Location Name” field, instead click on the “find” button next to it. search for your location and click “OK”. All other fields will be filled in automatically (including the coordinates fields). cheers

Aaron: Regarding the ATI/Compiz/AIGLX functionality, my experience reflects Tom’s. I’ve just installed 8.04 Beta on my ATI laptop – where Compiz took a lot of fiddling to setup properly under 7.10 – and the system asked if I wanted to install the proprietary ATI driver. Three minutes and a restart later, and it’s all working perfectly!

All I can say is: BRILLIANT!

It will back up info about Your installed packages so You can probably import this in Synaptic in Hardy. Hardy should install this from it’s own repositories :)

You can back it up from command line as well:
sudo dpkg –get-selections > /tmp/dpkglist.txt

OMG, they didn’t fix the ugly “Mark All Upgrades” icon in synaptic.

PS
what’s the use of submitting blueprints and bugs if they don’t get fixed?

> what’s the use of submitting blueprints and bugs if they don’t get fixed?

And the icon is OK by my standards. Change your icon set if you don’t like the default one.

Just a note of caution. My Nvidia graphic drivers were set up properly and compiz was enabled at the same time. Unfortunately, the title bars have disappeared and with compiz enabled not even text is displayed when using a terminal. Disabling compiz restored the text but not the titlebars.

I always go fro a clean install everytime I upgrade Ubuntu, that way I don’t get any issues with upgrading (I hear it can be a real nightmare for some). I also agree with a seperate /home partition, not sure if it is the manual option when partitioning during install. I shall wait a few weeks yet before I blitz my 7.10 install.

Hi guys! I installed UbuntuHH today and with my old Nvidia I started easily desktop effects after downloading drivers from repository but….
Now I cannot view the menus! File, edit, view etc…
also the applications menu…I can just click on it, I can also Scroll on it (if I click the menu starts the item) but is 100% trasparent and I’m very sad for this little inconvenient..Anyone experienced some kind of problem? Could be double buffering problem? Any help would be very appreciated…for the rest…great distro! ^_^

solved!
compiz was keeping the old setting oz menu opacity (-20)
I adjusted it in general settings -> opacity tab
That’s beceuse I had installed manteining my old home directory :D
Hope could be useful to other that issue
byez!
enjoy ;)

Just curious, since you appear to use the same video card as myself…

When you are using teh restricted nVidia driver with Desktop Effects enabled on Hardy Beta, do videos play with a bluish tint and does launching klibido crash your x server? This has been my experience, and I’ve reverted tot eh 2D driver as a result. Strangely this phenomenon is a regression from Gutsy.

Thanks, I’m glad to hear it: installing Gutsy was a pain. I bought a new Inspiron, and when I went to to install it, the live CD wouldn’t even work – this was before they fixed it. It took a lot of workarounds to get Gutsy installed and even more to get it working nicely.

BadServo:
I’ve had no problems with the Nvidia driver. For the bluish video, have you tried adjusting the color balance in Totem?

I think there’s a new “beta” version of Java that is supposed to work exceptionally well in Firefox 3.

Tom:
Yeah, adjusting the color balance is ineffectual. After poking around on Launchpad I’ve determined it’s a preexisting bug in the proprietary drivers. All video players are affected. Disabling the xv in teh gstreamer properties fixes it for Totem, but VLC, etc continue to be affected. Oddly enough, video thumbnails appear to be rendered correctly. The version of the 2D nv driver in Hardy seems a bit buggy as well causing some rendering issues in some apps.

I’ve had a few more problems with it - though I did the alternate install and was setting up a 4x500GB RAID5.

The server is up and is functional - though now updates are causing me grief.

There have been quite a few reviews that say 8.04 Beta is ready for general use, so hopefully after I overcome my initial problems it’ll be smooth sailing.

I just installed 8.08b through my USB port (pendrivelinux.com, my heart) onto my 2r old gateway notebook. I’ve always had problems with linux and my 200M ATI driver but with this install everything worked perfectly, 3d effects worked immediately after installing the restricted driver. my wireless isnt working yet, but bcm4318 has issues anyway. this is defininately the best “immediate use” distro yet. can’t wait till the official LTS.