Maarten Lankhorst has posted in the wine-devel mailing list that he has successfully got an iPod to sync with iTunes running on Linux with Wine.

I got an ipod I borrowed to sync: http://www.astro.rug.nl/~lankhorst/ipod.png

There are, however, 3 separate issues to work out for this to work with an unpatched version of wine, minus the patches I sent to wine-patches, and one I still need to confirm with rob. 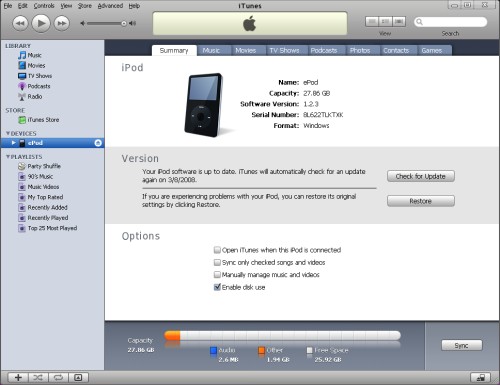 iTunes has been mostly working on Linux with Wine for a while now. This has included playing and purchasing protected files, but not syncing or even recognizing an iPod device.

It’s true that there are many open source alternatives to iTunes (such as Amarok and Banshee) that can sync to most iPods. However, the iPhone and iPod Touch have to be hacked before it’s possible to sync them with anything other than iTunes. Also, it’s not possible to upgrade firmware using software on Linux.

iTunes with iPod support is exciting news for iPhone/Touch users who don’t want to rely on Windows, as well as people switching to Linux who aren’t ready to leave iTunes. Let’s hope this will lead to it being supported soon!

I wish I could get the Microsoft Zune Software to run on Wine. I really need to be able to sync my Zune and the only way to do it is with the Zune’s proprietary software. If you figure out how to install the Microsoft Zune software on Wine, please let me know. If you have time to work on this or know someone who works on the Wine project team that can work on this, please do share. The Zune is worthless without the software. Please don’t say “It’s your fault for buying a Zune” because I have already spent the 200+ dollars for it. Besides, the Zune is a really great media player! <-No Joke! It just sucks that you have to use Microsoft’s proprietary software to sync it… Any help would be greatly appreciated.

It sucks that you got suckered into it-I feel bad for people like you who either don’t understand the implications or understand them and then are dumb enough to play ball. Sometimes you have to take a hit and realize that you made a mistake. There are things you could do though to resolve the situation without taking a huge hit. Sell the thing on an auction site for example. If you value your freedom- you shouldn’t play ball with Microsoft, Apple, or any other company that acts in ways you find egregious. You might not have allot of options- but you do have options. I chose to stop playing ball and am better off for it. I don’t end up in these “this sucks- it doesn’t work” situations any more. Those who have issues like this are switching over and just come to understand the issues or don’t get it. If you get it you don’t play ball with bad companies and products-it’s that simple.

Please take a look at the libmtp project, then vote to get better support for most portable media players in Ubuntu:

“libmtp is an implementation of Microsoft’s Media Transfer Protocol (MTP) in the form of a library suitable primarily for POSIX compliant operating systems. We implement MTP Basic, the stuff proposed for standardization. The core implementation is identical to libgphoto2, there is just a different API adapted to portable media players. It is of course licensed under the GNU Lesser General Public License.”

Here is an example of a project based on the libmtp library.

great! can you explain how to do it?

This is really good to know. The one thing that most people object to when I tell them about Ubuntu Linux is the fact that they will not be able to use itunes with it, so this is very good to hear. Shoot, the only reason I even dual boot with Vista is to run itunes every now and then. I would love to see wine become more capable so I could be able to never have to boot up a windows OS ever again…

iTunes with iPod support?? Isn’t that the same thing as saying iPod with music support? Or is there a package that I’m supposed to download?
~Tony~

The “Maarten Lankhorst has posted” message link is incorrect. It should be :