The Ubuntu 8.10, the Intrepid Ibex, has been announced by Mark Shuttleworth.

With Hardy now past feature-freeze it’s time to start to plan features that are being lined up for inclusion after Ubuntu 8.04 LTS is released in April.

And so I’d like to introduce you to the Intrepid Ibex, the release which is planned for October 2008, and which is likely to have the version number 8.10.

The release will be focusing on the user interaction model and wireless networking.

Our desktop offering will once again be a focal point as we re-engineer the user interaction model so that Ubuntu works as well on a high-end workstation as it does on a feisty little subnotebook. We’ll also be reaching new peaks of performance - aiming to make the mobile desktop as productive as possible.

A particular focus for us will be pervasive internet access, the ability to tap into bandwidth whenever and wherever you happen to be.

I found a wiki page with code name ideas for Ubuntu releases in the usual adjective/animal format. Don’t like the sound of Intrepid Ibex? Be glad it wasn’t “Interagency Isisaurus”, “Inescapable Icebear”, or “Inconceivable Irukandji”. 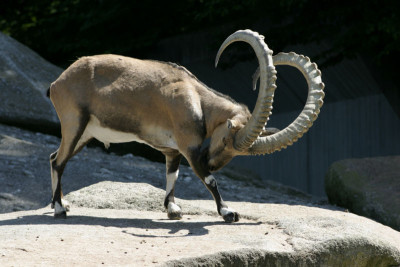 An Ibex is a type of wild mountain goat with large horns found in Eurasia, North Africa, and East Africa.