TrueCrypt is a well known and trusted open source application for encryption. It allows you to create and manage an encrypted volumes that can be used seamlessly and transparently.

TrueCrypt on Ubuntu isn’t new, I have written about it before. The new TrueCrypt 5 includes a GTK graphical user interface for Linux users, system partition encryption with pre-boot authentication (Windows only), and improved performance.

Installing TrueCrypt 5 in Ubuntu is easy:

The new interface on Linux is almost identical to the one on Windows: 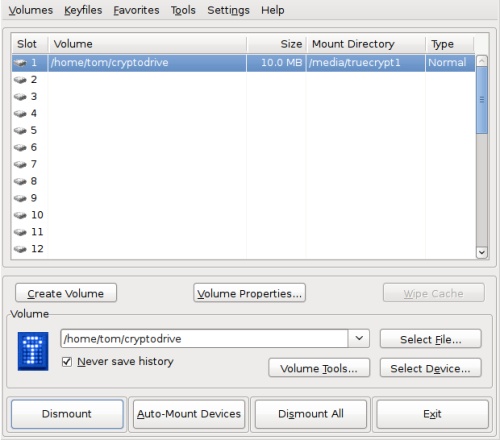 It’s a simple process to create a new encrypted file or device using the wizard. 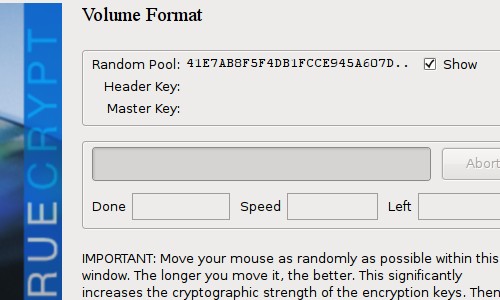 After selecting the device or file to mount, selecting a slot, and clicking Mount, the encrypted partition immediately shows up in the Places menu. Writing and reading from a TrueCrypt partition is seamless.

There are some things that make it clear the interface was originally designed for Windows. In Windows, you have to select a drive letter to mount to. The Linux interface still has a list of “slots”, which don’t mean anything on Linux. The little drive icon is also the one from Windows XP instead of the GTK theme.

TrueCrypt 5 is excellent software for keeping files secure, especially on laptops. I hope that it’ll be included in the Ubuntu 8.04 repositories.

Can TC5 for Ubuntu do system drive encryption like the Windows version can? I was not really clear about that when I read about it on their site. That would be a great feature to have, especially if using Ubuntu on a laptop.

Stephen:
Nope, I didn’t realize that that was Windows-only.
http://www.truecrypt.org/docs/?s=sys-encryption-supported-os

Truecrypt 5.0 for Linux is disappointing. No hidden volume support, no system drive encryption, and no 64-bit deb packages.

it does has hidden volume support on disk and drive mode, there is a 64-bit deb package available on the truecrypt site.

basically im tell you everything you wrote is wrong.

well, i think truecrypt is excellent, but I heard one program like this that do the system encryption. Anyone knows what program is? I remember that program use the file-keys for the ultimate decryption I don’t remember nothing more :S

Can’t you already get a system-wide encryption option when you’re installing Ubuntu?

Mike, it’s really quite sad how you troll seemingly every Web site with a comment section and bash TrueCrypt over and over again for its lack of Linux support. Get a life, dude.

Just installed TrueCrypt 5.1 on Debian Lenny and it supports hidden partitions. There is also a .deb available for AMD64 so unless you meant IA-64 support TrueCrypt supports 64 bit platforms.

A good option for usb sticks.

There are a couple more options on linux that are better integrated and supported than truecrypt. The nice thing about truecrypt however: It works on linux and windows. Perfect for a encrypted usb-stick.