Update: It’s not the major update, but two new themes have been included in Ubuntu 8.04.

The completely new theme for Ubuntu 8.04 has been deferred to the following release. The original plan was to have a fresh theme for every long-term-support release, starting with Ubuntu 8.04 Hardy Heron. Now it has been decided to put off the redesign until Ubuntu 8.10.

[update] Here is the source, a posting by Kenneth Wimer:

Many of the basic questions have now been answered and we can begin to move forward in earnest - remember though, we are not going to change the theme for Hardy radically as it is the last of the LTS cycle (stated in previous mails, launchpad blueprints, irc, etc).

Many theme concepts can be found in the Ubuntu Artwork wiki. Below is one of the many that have been popular, Gelatin: 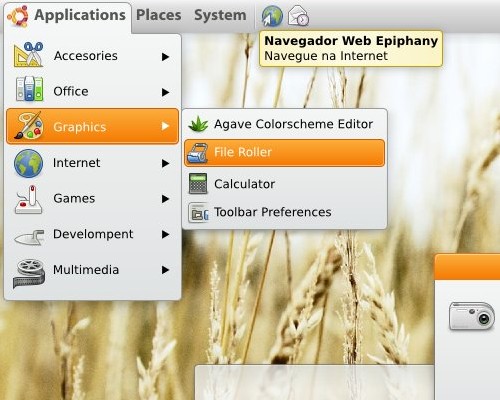 The 8.04 theme won’t be exactly the same, there are plans to make minor improvements. Work on the totally new theme has not stopped either so now there will be plenty of time to make it great.

It’s disappointing that there will be no new theme, it was due to be one of the highlights of the release. Just think about the many other improvements that will make it in to Ubuntu 8.04 like Firefox 3, PulseAudio, Transmission, and better Compiz Fusion effects.

Did Canonical think that this theme would be unstable, or not finished in time? I really like the idea of an updated theme, especially since it is going to be seen on some desktops for the next three years.

No matter how we update the theme, we must always make sure that people can identify an Ubuntu theme from a screenshot. I love finding people who use Ubuntu simply from seeing their screenshots. For instance, one of my favorite video blogs for Gimp is called “Meet the GIMP” and it is easy to see that the author is running Ubuntu.

In a way I am glad they have deferred because it means time will be spent on maturing the core of the LTS release which is about stability and ruggedness. Also, it will give more time to develop a new theme rather than rushing it and missing the ‘new theme’ boat so that when Ubuntu 8.10 rolls around, it will have a matured theme. Too many themes are knocked up too quickly and what Ubuntu and others in general need is quality, tried and tested visuals.

recently i booted into hardy alpha 4 and my first thought was :
jesus how ugly ,boring and old fashioned is that look and theme . reminds me of win2k .
second look : clutterd , userunfriendly menues , no controlcenter , disguisting networkmanager etcetc ….

The artwork team is entirely separate from the people working on the core of the system. They are mainly artists. So basically it is sad that the Artwork Team’s hard work won’t really be showing in 8.04. Also, it’s just a theme, it’s not like they’re adding tons of new stuff, so there really isn’t any “bloat”.

So, when can we expect apt-get install gelatin to work? In Hardy+1 alpha?

I don’t understand the fuss. Gnome makes it so easy to install new themes… It’s really the first thing I do when I install. I don’t like orange - I like green.

Looks nice, but can’t they get rid of the grey? I find it really depressing to have to sit in front of a computer all day when the menus and other borders are grey. Light blue or brown or something that goes a bit better with the orange….

I find it very strange that something as simple to change as a THEME needs to be delayed when they are going forward with DRASTIC new technological features such as PolicyKit and PulseAudio… I mean these things haven’t been tested at all on a large scale, how can they be ready for an LTS!?

I don’t mind delaying the theme, but then I would delay the LTS release as well… I think 8.04 should be a normal release, in order to fully test drive the new technologies and architectural changes, as well as apply all the bug fixes, before releasing an LTS.

I’m truly intrigued by these strange decisions. A new theme should be no big deal at all… no?

Lack of leadership in Art devision of Cananonical shows again and again….

The contents of the menu “Graphics” it’s a LOL.
In ubuntu is everywhere?

waiting for the ebuilds! fonts suck!

This is pretty sad…I really like Ubuntu (heck I even liked the brown in Dapper) but it does need a visual refresh, and seems like the time is now. Instead, we’re waiting *another* six months.

Why is File Roller and Calculator in the Graphics menu? :-)

love it. I’m falling in love with themes all over again <3