EA has donated the original SimCity source code to the One Laptop per Child project to port it to Linux and include on the laptops. It’s now called Micropolis, and can be played on any Linux system. 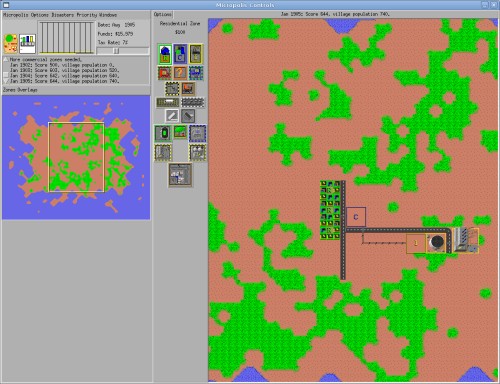 Micropolis can be easily installed in Ubuntu using the package available at GetDeb. The official downloads will also run, but have a bug where the main view does not work properly so it’s best to use the package.

Some more information is available about where Micropolis is heading.

In the long term, Micropolis can be recast from C to C++ classes, so it’s possible to define clean interfaces between software modules, and make multiple instances of the simulator that don’t interfere with each other, as well as easily interfacing it to Python using the SWIG interface generator.

It installed fine and runs, but the window is to big for my screen resolution, and it can not be resized.
Any solution?

@ Pete, theres a fix been released which patches that bug, not sure when it’ll get packaged though into a Deb file.

I also have the screen resolution problem. My laptop screen is too small :(