Picasa is Google’s free photo organization software. Picasa runs on Linux officially, but instead of a native port to Linux it uses Wine to run.

Picasa is software that helps you instantly find, edit and share all the pictures on your computer. Every time you open Picasa, it automatically locates all your pictures (even ones you forgot you had) and sorts them into visual albums organized by date with folder names you will recognize.

Going to the official website, picasa.google.com, I saw no mention of the Linux version. A Google search brought me to the Linux site where I downloaded the DEB package for Picasa 2.7 beta. I hope that once it’s out of beta, Picasa for Linux will be available on the main website.

After the installation, the Picasa launcher was added to Applications->Other rather than a proper submenu. Launching Picasa caused nothing to happen for about 30 seconds until the license agreement opened. 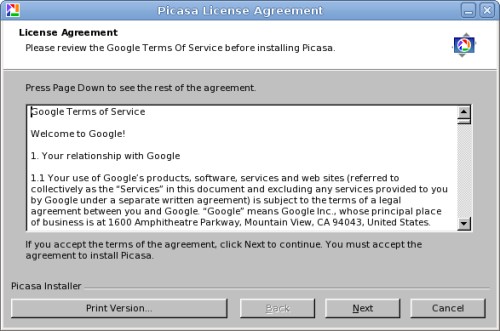 The ugly interface widgets and gray background give Picasa away as a Wine application. Luckily, most of Picasa uses non-native widgets which look fine. The media detection worked perfectly and alerted me to new photos.

I found Picasa for Linux to be polished and working well despite running on top of Wine. In depth instructions for installing Picasa can be found here.

I wonder if I did something wrong when I installed it then…although not on Ubuntu but Mepis, and I used google’s own repo.

Or maybe it is a gnome vs kde issue. Thing is, for me it installed under its own submenu as it should. Graphics->Picasa, and the Picasa menu had the program proper as well as a settings program.

Still, a nice program even if on the slow side. Other things runs fast under wine so I don’t think wine is the problem either.

BTW, anyone know how one disables that darn media-detector program?

Why the WINE hate? WINE *is* native Linux code, just like your favorite GNOME/KDE/whatever libraries, so Picasa for Linux is as Native as any other photo management tool you might use. It’s not like Google said “hey, grab WINE and see if our product works”… They *designed* it to use the WINE libraries. They *wrote code* for WINE so that they would have all the tools they needed to give us Picasa.

Picasa didn’t work for me on Gutsy. In fact, when I had it, it froze my PC completely so I had to remove it and now I just use G-Spot. It works at least.

Ironically, running the Windows version of Picasa in Wine gives you a more funcational version of Picasa.
The Linux version lacks support for many things, such as uploading your photos to picasaweb.

you must be using an old version, I’ve been using the Linux version to upload to picasaweb ever since I downloaded it. (from the google page)