Ubuntu JeOS 7.10 has been released. JeOS is a official derivative of Ubuntu 7.10 that is designed for virtual appliances.

By itself, Ubuntu JeOS doesn’t do anything exciting. It is intended to be a platform for ISVs (independent software vendors) who build virtual appliances. 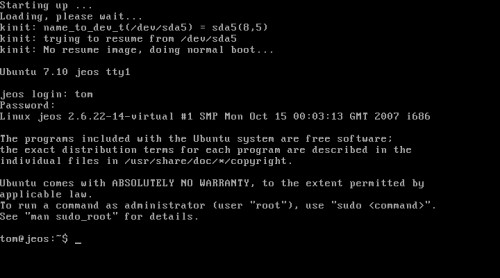 I downloaded the Ubuntu JeOS ISO image to test in VirtualBox. The ISO image is only 150 MB, and the installed system is about 500 MB. Its install was just like Ubuntu Server, and boots to a command line.

You you run a virtual Ubuntu server you may want to try JeOS, especially if you are using VMware who has been working with Canonical to optimize it.