Android is software stack for mobile devices from Google. It’s open source and based on the Linux kernel.

The Android platform is a software stack for mobile devices including an operating system, middleware and key applications. Developers can create applications for the platform using the Android SDK. Applications are written using the Java programming language and run on Dalvik, a custom virtual machine designed for embedded use which runs on top of a Linux kernel.

To try out the Android emulator, download and unzip the Linux SDK package. The emulator executable is located in the tools subdirectory.

Run the emulator executable and Android will boot up.

Run ./emulator -help in a terminal to see a list of options. The -skin options lets you select a skin from the tools/lib/images/skins directory. 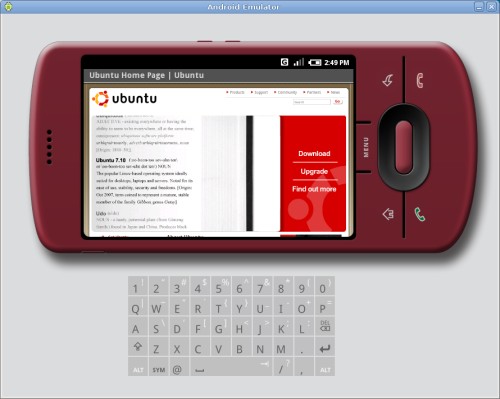