Freeciv is a turn-based strategy game similar to the Civilization series of games.

Freeciv is a Free and Open Source empire-building strategy game inspired by the history of human civilization. The game commences in prehistory and your mission is to lead your tribe from the stone age to the space age…

The latest 2.1.0 release of Freeciv has been in development for almost two years. Packages for Ubuntu 7.10 are available at GetDeb. You need to install freeciv-data, freeciv-server, and freeciv-client-gtk in that order. Freeciv is added to the GNOME menu under Games.

The GTK game client makes it easy to set up a single or multiplayer game. Widgets have been styled to give them a nice Freeciv theme. The default tileset in the game is nice, but it lacks animations such as those in Civilization 3. 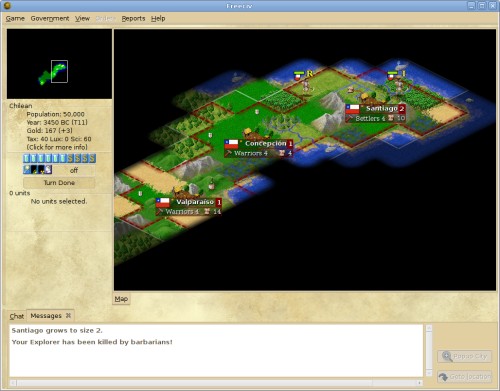 Freeciv is not as easy to learn as the commercial Civilization games. Selecting and moving units can be tricky, as well as knowing where to look for messages. But don’t be put off by this, read the client documentation and you will quickly be ready to play.

If you are a fan of the Civilization series, like me, you will enjoy playing Freeciv. The graphics are not comparable to the most recent commercial games but it is still a blast to play.