Gobuntu is a official derivative of Ubuntu composed of only open source software. It was launched with the Ubuntu 7.10 release.

Gobuntu is a GNU/Linux operating system, derived from Ubuntu, that endeavors to adhere to the Free Software Foundations four freedoms and intends to provide a base for other free software platforms to build upon with minimal modification required.

Since the release of Gobuntu there has been not much said about it. So I downloaded the ISO and installed in VirtualBox to take a look. 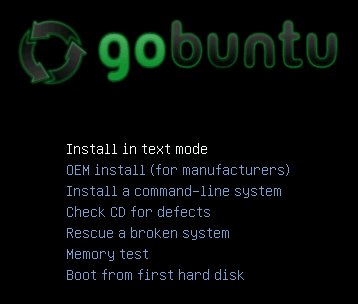 The first thing that I noticed was that there was no live CD for Gobuntu. My guess would be that the developers figure that it is not worth their time to create and test another CD that so few people will use. But it would be nice to have a live CD so people could try out how their hardware works with a completely free system before deciding to install. This is crucial with Gobuntu because lots of hardware will not work without proprietary drivers.

Please note that because running Gobuntu on most laptops and many desktops will be difficult, Gobuntu is intended for experienced Linux enthusiasts at this time.

Besides the logo on the boot menu, Gobuntu looks just like Ubuntu. It even identifies itself as Ubuntu.

Normal Ubuntu does not run a lot of proprietary software, but I did notice was that the restricted manager was missing in Gobuntu.

However, looking in Add/Remove Applications revealed that codecs, closed-source drivers and restricted software were still available. Browsing to a web page with Flash caused Firefox to ask me if I wanted to install Adobe’s proprietary Flash. Firefox’s logo was unchanged, which is odd considering that in Debian they needed to change the name and all the artwork.

If you want to use a completely free distro, Gobuntu will work. But there is the Firefox issue, and you have watch out for non-free packages that are still easily installable.

Apart from Adobe’s Flash Firefox will offer you Gnash - a free software replacement for Adobe Flash.