Gnash is an open source player for Adobe’s Flash format. It can be used as an alternative to Adobe’s proprietary player. The upcoming Ubuntu 7.10 release includes automatic installation of either Adobe Flash or Gnash. I decided to put this feature to the test in Ubuntu 7.10 Beta.

Surfing to a page with an embedded Flash video causes Firefox to offer to install the missing plugins. I chose the option to install the Gnash player. 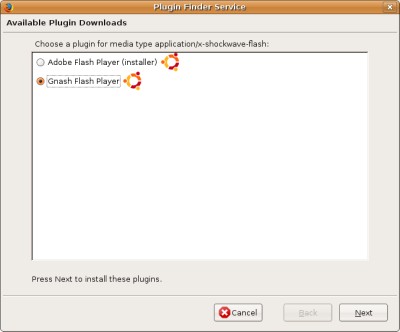 Ubuntu downloaded and installed the player, and warned that it needed to be restarted. After doing so the flash on YouTube would load, but the front page was not looking good so far:

Attempting to play a video caused Firefox ask me to install two more codecs. These were additional a/v codecs needed for the streaming video on YouTube. After the installation, the video began to play. However, the most of the player interface was messed up. Moving the playback slider also did not work. 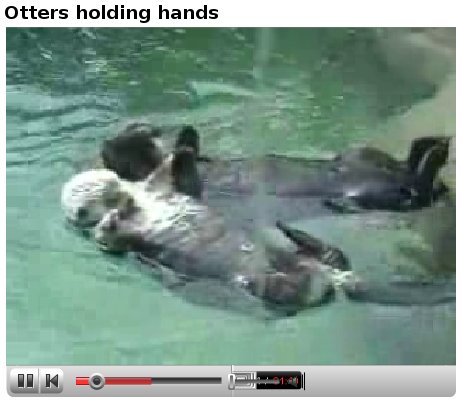 I failed to find a recent Flash game that worked with Gnash. None of my tests even loaded. I suppose that the developer are focusing on streaming video sites, which are the main use of Flash these days. If you want to game you will need Adobe’s player.

Ubuntu’s Flash installer works perfectly, a new user would have no trouble using it to get a Flash player installed. Gnash is not ready for general use, unless all you need to do is watch videos and you don’t mind the player interface not working. Otherwise, Adobe’s player is the only choice. Hopefully Gnash will continue to develop to a point were it will be a viable alternative.

Here are some of the bugs I came across while testing Gnash:

Gnash only support flash7, that is the reason of not playing actual flash games. Although the support for flash9 is very near.

I found the gnash flash player to be inneffective, but the macromedia flash player, which in installed by Ubuntu 7.10 is quite effective

yeah, still no real solution for Firefox on an AMD64 machine…it just hangs on any flash site…I had to switch to Opera, which is OK, but lacks the extensions of FF…

It’s not even working on the Adobe option. Last version works just fine.

I upgraded to 7:10 (ended up having to wipe the whole shooting match (dual boot with XP) and fresh install both o/s’s - She wasn’t impressed) but I just can’t get the flash sites she loves to work !!

WTF is that all about ?

This is one of her fave games atm… http://www.addictinggames.com/nightmarehouse.html

Does it work on anyone elses Ubuntu install ?

While Ubuntu is great I hope they fix the Adobe flash player issue and perhaps the DVD player issue it seems like it is very close to eliminating a need for MS and that will be a great day!

Gnash is a extremely nice for architectures that don’t have adobe support. I really commend them on the job they are doing.

Looks nice. Open source is always nice. I tried to get it compiled in 7.04 and was really caught up in dependency hell. I requested a 7.10 disk. Maybe it’ll be better.

I simply do not understand why all this stupid web designers insist on saving and using Flash 9 format just because it is the ‘latest and greatest’. Why do they not design for the masses? And not just the latest made computer, who can afford to upgrade your computer every year to run the latest Flash. Flash thus SUCKS. SAVE IN FLASH 7 FORMATS, IDIOTS.

Gnash is a Horrible disease that the Open source world should terminate at once, I seen some many people give up Linux because of Gnash.

I simply do not understand why all this stupid web designers insist on saving and using Flash 9 format just because it is the ‘latest and greatest’. Why do they not design for the masses? And not just the latest made computer, who can afford to upgrade your computer every year to run the latest Flash. ….yeah! really

It’s not even working on the Adobe option. Last version works just fine.