Cheese is an application for taking video and pictures with a web camera. It was inspired by Apple’s Photo Booth software, and includes fun effects that can be applied to the video.

I installed Cheese 0.2.4 from GetDeb.net on 32bit Ubuntu Feisty. A 64bit Deb package is also available. Since I started using Linux I have never tried to set up any webcams. It turned out to be easy; both of my old USB webcams worked perfectly with Cheese without configuration. However, a friend’s HP laptop’s build in camera failed to be recognized by Cheese. 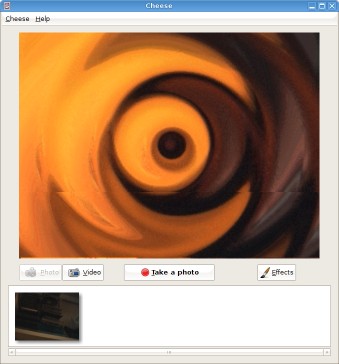 Cheese’s simple interface is fairly straightforward to use. It has a handy file manager at the bottom that displays all the photos and videos. They can be viewed by double clicking, saved, or moved to the trash. The effects button brings up a list of effects that can be toggled on and off, and multiple effect can be selected at a time. The only confusing part of the interface is that instead of having “Take picture” and “Take Video” buttons, there are separate modes for each task. Another nice touch is the screen flash when a picture is taken.

Windows and OS X both have support for web cams by default. I think that Cheese is a good candidate for being included in GNOME to bring it similar functionality. If Cheese came installed with Ubuntu, maybe Dell could include a webcam option for their Ubuntu laptops.

I think it’s a pretty cool app. I’ve played with it a bit. Though I’m not a big cam user.

I’d really love to see the open source community come up with something new, rather than copying whatever Apple does. Hey! Look! Apple has a funky dock that magnifies at the bottom of the screen! Let’s do that! Hey! Now they’ve got widgets! Let’s do that! Hey! What about Photobooth? Oh yeah, we can do that too!

I love the worlds of Linux and Open Source, but I really want to see some fresh ideas and not rehashes of other people’s work. My guess is that it’s because:

2) UI design is an afterthought to most open source programmers - they’re more interested in how something works rather than how it looks. Which is fine… except it leads to rampant duplication of existing projects.

I can’t wait to get home and try this out! I’ve been looking for a Windows equivalent to the Apple Photo Booth, but a linux one is even better.

“I love the worlds of Linux and Open Source, but I really want to see some fresh ideas and not rehashes of other people’s work.”

You are an idiot. This type of project was going on long before Apple popped a camera into their hardware.
I created my own webcam snapshot tool over 5 years ago in Linux. Can’t do that with the craApple code.

As far as original ideas, I’d like to see Apple users actually produce something worthwhile. Apple has you by the nose, they make the apps better looking than 99% of the creations people come up with. A turd wrapped in gold leaf is still a turd.

I swear there is some quantum-physics like law at work in the Apple world where nothing exists until it appears on an iBook (or whatever they’re iCalled). Seriously though, I just bought an iWasher, sure it was $4000, but they wouldn’t charge that much unless it was worth it. Then all I had to do was buy some iDetergent and sign a 2 year contract with an iWater supplier. Now, all I have to do is put in my iPants, push a button and a while later, they’re clean. It just works!!! Thanks Steve!!!

I so tired of Apple users thinking that they are better than anyone else yet don’t seem to realize they are spending way to much money and complain that other people/companies are stealing ideas. In the world in general, people/comapnies take ideas from each other all the time. Apple took the gui environment from Xerox, chess, other games from Game Manufacturers. Apple took BSD code, spaces comes from the workspaces concept on linux/bsd just modified a bit. They took calendar program, photo, imovie, final cut from other software manufacturers who have already created software prior to Apple “inventing” it. It is hypocritcal to start whining about others “stealing ideas from Apple”. More power to you if you can get something for free or cheaper.

i have install cheese for my laptop webcam. It is properly installed but when i took photo it is not showing any photo.

I have had similar problems with my Acer Laptop, the built in webcam would not work. Eentually I downloaded “Cheese” and the webcam worked. I just did a “take photo” which worked OK but I noticed that it did a count-down (3-2-1-0) when it took the photo. The photo appeared in “Pictures/Webcam/date-number.jpg). I hope this helps.

How can I take a cheese photo using a comand line in a terminal window (I would like to take photo without having focus on cheese window)?

i love it same thing as an apple product would have. :)