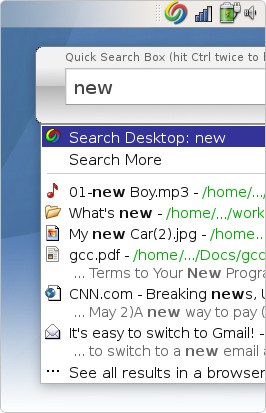 Google Desktop for Linux is based on Google’s own desktop search algorithms. As such, it is not an open-source program. A Google representative also said that the program is not built on existing Linux search programs, such as Novell engineer Nat Friedman’s popular Beagle search program.

Google Desktop is supported on many Linux distributions.

The first version supports many popular versions of Linux. It comes in the form of both RPM and a DEB distribution packages. The RPM can be installed on Red Hat, Fedora, SUSE, and Mandriva distributions. The DEB will install on Debian and Ubuntu systems. The program works with both KDE and GNOME.

A how-to for installing Google Desktop on Ubuntu is available here.