Wubi is a user-friendly Ubuntu installer that runs in Windows. It installs Ubuntu to a file instead of a partition and modifies the existing Windows boot loader. There is no virtualization going on here, Ubuntu sees the file as a disk and runs normally. 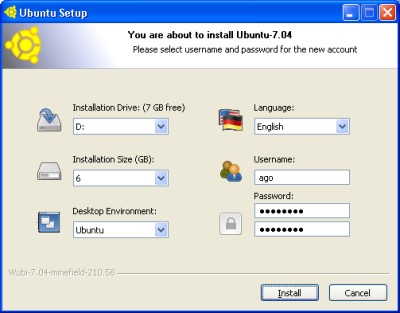 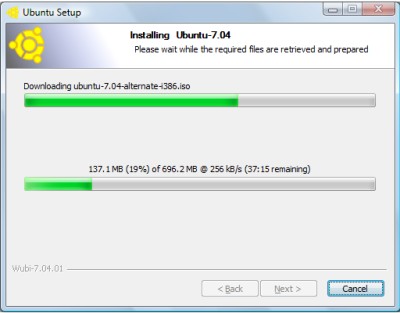 Wubi is an unofficial Ubuntu installer for Windows users that will bring you into the Linux world with a single click. Wubi allows you to install and uninstall Ubuntu as any other application. If you heard about Linux and Ubuntu, if you wanted to try them but you were afraid, this is for you.

Wubi looks like a very useful project, although I am not sure how stable the current beta release is. They are hoping to make it an official part of Ubuntu 7.10. Wubi is open source software.

How does Wubi work?
Wubi adds an entry to the Windows boot menu which allows you to run Linux. Ubuntu is installed within a file in the windows file system (c:\wubi\disks\system.virtual.disk), this file is seen by Linux as a real hard disk.

Wubi can be downloaded from their SourceForge site.

i downloaded it and installed it on a separate partition on my disk from windows vista. i select the ubuntu from the bootloader and wait for it to start. once it starts i put the username and password and start it but all that comes out is a peach background with some kind of african music and it stays that way until i turn off manually the pc. please help

I did the same thing as Carlos. I think they should disable the choice of the disk partition so that people stop making the mistake.