I recently came across an interesting approach to the typical Web OS. Most commonly, a Web OS uses Javascript and PHP to emulate the look of a desktop enviroment. What Desktop On Demand does differently is that it is a real desktop, running Linux and GNOME. Desktop On Demand provides 1gb of storage for your files.

The desktop is accessed through a remote access technology called NX. The core pieces of NX are licensed under the GPL. You have two choices to access the Desktop On Demand desktop: use a Java NX client or download NoMachine’s NX client. I could not get the Java client to work so I downloaded the NX deb package and installed it in Ubuntu. I then downloaded the dot NXS configuration file and logged in to my Desktop On Demand desktop. 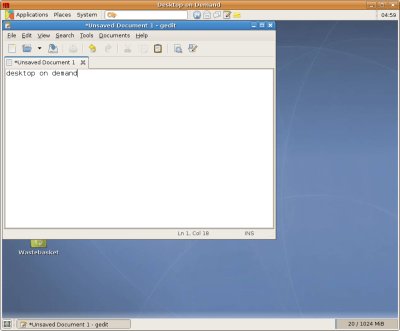 The desktop uses mostly default GNOME applications, but also includes some extras. The only applications I missed were Firefox (Epiphany was installed) and a terminal. I was disappointed that Flash was not installed. It would be nice for the desktop to be more open and allow installing software. The server appears to be in the UK and I am in Vancouver, but the speed is amazing, almost as fast as using my own computer. This is a result of the extremely fast NX technology. The only slowdown was browsing the files in my 1gb of storage, which was very slow.

Desktop On Demand could be a excellent solution if you want to have a persistent GNOME desktop from any computer. The only problem I really have is the NX desktop client, which needs administrative privileges to be installed. Without the Java client working for me this is a major issue because I can only use it from my own computers. I also wonder how they are paying for the bandwidth and processing power required to run so many desktops. Of course, it is possible to set up your own NX server with FreeNX and do what Desktop On Demand is doing on your own server. I might have to try that for fun sometime.

Desktop On Demand has a nice video explaining their features here.