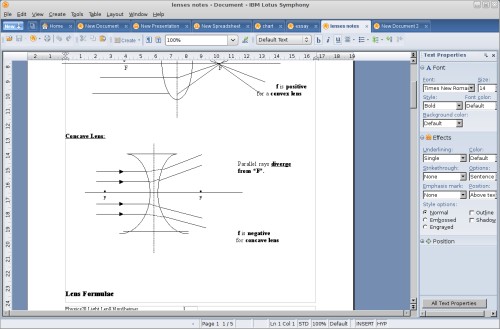 Before starting the installation, you need to install an extra dependency or the installer will fail with the error: Installation requires libstdc++.so.5 to continue. Install the package libstdc++5 before continuing:

IBM still hasn’t fixed the problem from Beta 3 where the installer fails with Compiz enabled. Disable your desktop effects before using the installer.

Open a terminal and change to the directory where you downloaded the file:

Allow the installer to be executed:

Run the installer as root:

The installer is similar to typical application installers on Windows. Just follow the instructions, I let the installer use the default destination directory.

Another issue from Beta 3 that was never fixed is the permissions issue that causes running Lotus Symphony to fail silently even from the terminal. Run this command to fix the problem, replacing username with your current user:

The first thing you will notice is Lotus Symphony’s blue and orange interface. IBM put an easy to use custom interface on top of OpenOffice. It does look nice, but it’s very far from looking like a native GTK application. Some native GTK widgets are used, but the side bar and dialogs use unstyled widgets, and the toolbar and tab bar use a custom look. Another annoying interface quirk I noticed was that the menu bar’s contents change when the window is focused and unfocused, for no reason I can see.

Lotus Symphony uses a tabbed interface. Multiple documents, presentations, and spreadsheets can be switched between from one window. A neat feature is the Show Thumbnails button on the tab bar which shows a preview of all open tabs.

Lotus Symphony uses the ODF standard file formats. In my testing I noticed that Lotus Symphony does much better rendering complex diagrams embedded in MS Office documents than OpenOffice 2.4. The font size problems I had with ODT files in the previous Beta seem to have been fixed. File compatibility with MS Office and ODF documents in Lotus Symphony is good.

In the last beta I found that the web browser component crashed when visiting almost any website. It has been downplayed now and is not shown on the home tab anymore. I opened it with the New button, and got this error: Unable to create view: Device is disposed. I don’t know why anyone would want to use this browser so I didn’t bother to fix it.

I’m still not impressed by Lotus Symphony. I found Lotus Symphony to be much slower than OpenOffice on my system. I really like the tabbed and simplified interface, but I’d much rather have a native GTK application. IBM really needs to fix the bugs in their Linux installer, and start providing DEB packages for easier installation.

IBM will have to keep working if they want to keep up with OpenOffice 3.

I was about to ask how openoffice code could be used in an proprietary application but I’ve discovered why. It appears it is released under the LGPL which allows the use of the code in non-gpl apps. http://kallewoof.com/2006/04/21/gpl-vs-lgpl/

Samtek:
OpenOffice was dual licensed under the Sun Industry Standards Source License (SISSL) before the 2.0 release. This was the license that allowed IBM to take the OpenOffice 1 code into a proprietary application.
http://en.wikipedia.org/wiki/OpenOffice.org#History

“I really like the tabbed and simplified interface, but I’d much rather have a native GTK application.”

You can get tabs in OpenOffice via extension. And OpenOffice is not a native GTK application either.

There is no need to turn off Desktop Effects (Compiz) for the installation to work. The following works as well:

Assumes that the .bin installation file is in ~

(Note: I do not know if sudo uses root’s environment or the user’s, so I ran sudo -s)

Thanks for the help.

I am on 8.04 and you instruction worked perfect on Symphony 1.0; I needed to run each step exactly as you stated.

Lots of time saved, Thanks Nick

Remember to tell people to turn off desktop effects before attempting install.

Thank you very much for your post: very useful!

Thanks for the info!
Important tip:
-If using Kubuntu, you will need to install libgnome and possibly some of the associated Java binding libraries.

Disgraceful IBM!! so much trouble on one of the most used Linux distros,it is so easy to install on Windows and looks so good, the thing is a bloody disgrace in Ubuntu, downright ugly

your info has been helpful, but in the end I am disappointed by this piece of software, i am going to uninstall now!!

After installing Symphony the Home page only showed an error about swt-mozilla-gtk not being in the right place so I added:“env.set.MOZILLA_FIVE_HOME=/usr/lib/seamonkey” to “/home/mike/.lotus/symphony/data/.config/rcpinstall.properties” and now the Home page is displayed properly, however the browser still crashes.